Central bankers, finance ministers, and investors from around the world gathered in Washington this week and hinted at stimulus policies as a path towards revival of the faltering global economy. There was little if any agreement on how it should be undertaken.

Finance officials vow to tackle sluggish global economic growth… “Global finance officials wrapped up their fall meetings on Saturday with a pledge to ‘employ all appropriate tools’ to combat the weakest global growth in a decade, but there was little evidence of progress in easing trade tensions, a major source of the slowdown.” – AP, Oct. 19

There was a consensus that a failure to act while structural weaknesses are taking hold might lead to a new financial crisis. At the opening of the conference, the IMF issued a report warning that the trade war between the U.S. China will cut 2019 global growth to its slowest pace since the 2008-2009 financial crisis. The IMF defines a world recession as growth slipping below 2.5% a year.

“Despite the recent decline in long-term interest rates creating more fiscal room, the global environment is expected to be characterized by relatively limited macroeconomic policy space to combat downturns and weaker trade flows, in part reflecting the increase in trade barriers and anticipated protracted trade policy uncertainty… With a synchronized slowdown and uncertain recovery, the global outlook remains precarious. At 3% growth, there is no room for policy mistakes and an urgent need for policymakers to cooperatively deescalate trade and geopolitical tensions… Further escalation of trade tensions and associated increases in policy uncertainty could weaken growth relative to the baseline projection.” 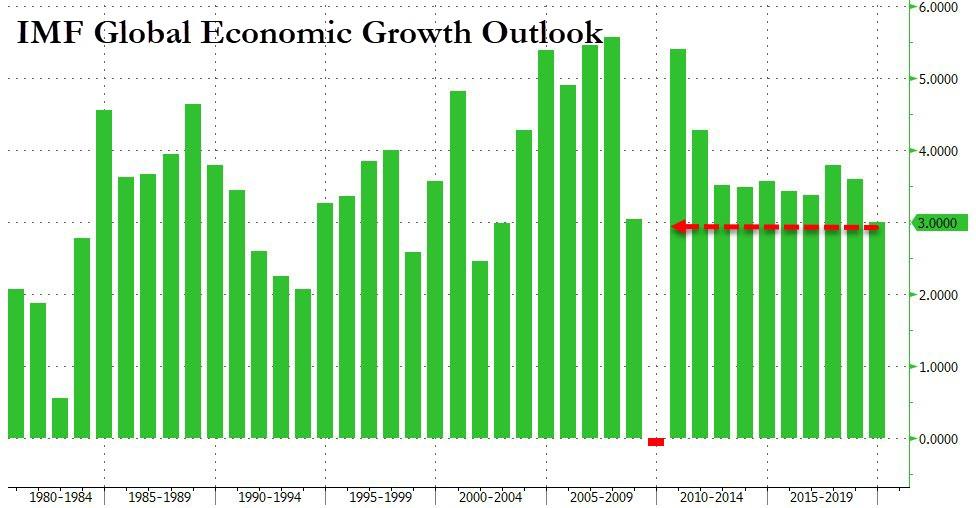 IMF says trade war will cut global growth to lowest since financial crisis… “The IMF said its latest World Economic Outlook projections show 2019 GDP growth at 3.0%, down from 3.2% in a July forecast, largely due to increasing fallout from global trade friction. The forecasts set a gloomy backdrop for the IMF and World Bank annual meetings this week in Washington, where the Fund’s new managing director, Kristalina Georgieva, is inheriting a range of problems, from stagnating trade to political backlash in some emerging market countries struggling with IMF-mandated austerity programs… The World Economic Outlook report spells out in sharp detail the economic difficulties caused by the U.S.-China tariffs, including direct costs, market turmoil, reduced investment and lower productivity due to supply chain disruptions.” – CNBC, Oct. 15

Kristalina took an opportunity to brown-nose Christine Lagarde, her predecessor at the IMF who is taking over as chief of the European Central Bank.

“The weakness in growth is driven by a sharp deterioration in manufacturing activity and global trade, with higher tariffs and prolonged trade policy uncertainty damaging investment and demand for capital goods… Slower growth requires that monetary policy remains supportive, but we all recognize that it cannot do the job alone, even Christine Lagarde cannot solve the problems on her own that lay on the path of slow growth — even her.  Fiscal policy must play a more active role.”

UN Secretary-General António Guterres warned that the global economic outlook is facing severe headwinds and focused on the U.S. and China trade war.

“During tense and testing times I fear the possibility of a Great Fracture. Two of the largest economies are splitting the globe in two – each with its own dominant currency, trade and financial rules, its own internet and artificial intelligence capacities and its own zero-sum geopolitical and military strategies. It is not too late to avoid and we must do everything possible to avert this… and maintain a universal economy with universal respect for international law; a multi-polar world with strong multilateral institutions, such as the World Bank and IMF.”

David Malpass, the World Bank Group President opined with a sanguine tone on the global slowdown.

“Discussions this week have been focused on challenges in the global economy. Growth is slowing, investment is sluggish, manufacturing activity is soft, and trade is weakening. Climate change and fragility are making poor countries more vulnerable. But the good news is, broad-based growth is still possible.”

Ray Dalio, billionaire and founder of hedge fund Bridgewater Associates weighed in on topics ranging from politics to global finance.

“Big, unique things are happening but we do not have a circumstance to cause a classic crash-type event at the end of the cycle. You do not have the same tightening of monetary policy and debt rollover. You have many long-term debt maturities and you have many obligations that are a burden. This cycle is fading and we are now in the world in what I would call the “great sag.” – Bloomberg, Oct. 20

The former New York Fed president Bill Dudley chimed in with his thoughts about Modern Monetary Theory (MMT), which proposes that governments do not need taxes or borrowing for spending since they can print as much as they need.

“The coordination of fiscal and monetary policy is fine but MMT takes it way too far.” – Bloomberg, Oct. 20

Almost everyone at the conference accepted that the slowdown was serious and the unusual divergence between manufacturing, the services industry, and retail consumer is unlikely to last much longer. Given the recent data release, the U.S. consumer looks like they are buckling under pressure while waiting for an official announcement that Goldilocks recession is right around the curve. 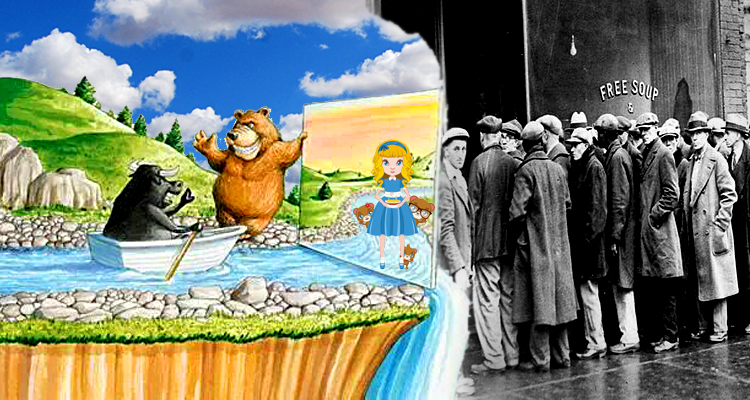 US retail sales unexpectedly decline in a sign that consumer economy could be cracking… “U.S. retail sales fell for the first time in seven months in September, raising fears that a slowdown in the American manufacturing sector could be starting to bleed into the consumer side of the economy. The Commerce Department said Wednesday that retail sales dropped 0.3% last month as households slashed spending on building materials, online purchases and especially automobiles.” – CNBC, Oct. 15 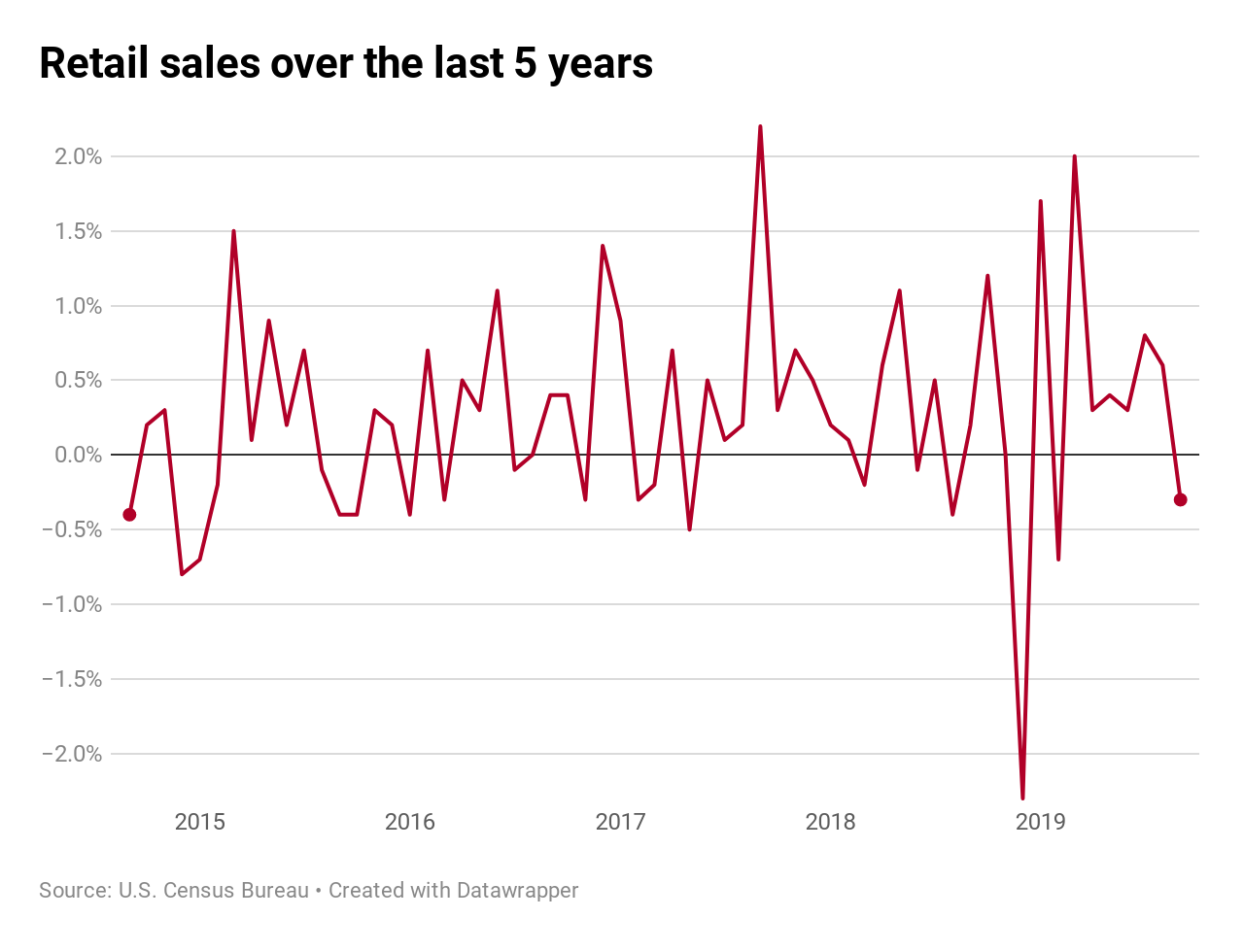 Yes, things do appear to be getting serious.

Protests around the world… “Protests have broken out in several countries across the world, with citizens unhappy for different reasons. Some are protesting over economic conditions, others are protesting over tax hikes, and elsewhere over controversial laws imposed by governments.” – The National, Oct. 19

Civil Unrest Is Erupting All Over The World, But Just Wait Until The United States Joins The Party… “All over the globe, the mood is turning sour.  Anger and frustration are bubbling over, and protests are becoming violent in major cities all across the planet. In some cases economic pain is driving the protests and in other cases political matters are motivating the protesters, and it has been a very long time since we have seen so many angry protests happening all over the world simultaneously. Unfortunately, many believe that what we have seen so far is just the beginning. Global economic conditions are rapidly deteriorating, and as economic pain intensifies that is only going to make everyone more frustrated.” – Michael Snyder, Oct. 20

Jim Grant interviewed by Stansberry Research – What is the Correct “Exit Plan” for Central Banks? – Oct. 9