Why GM Needs the Corvette to Succeed

If you’re a car enthusiast, you already know about the hype surrounding General Motors’ eighth-generation Chevrolet Corvette. Indeed, calling this everyman’s supercar hype is a grave injustice. From the absolutely stunning looks to the mid-engine format (the first in the sports car’s history) to early reviews of its performance, GM’s halo car has met all expectations and then some.

In fact, demand for the new C8 Corvette is so huge that one man, racing legend Rick Hendrick, shelled out $3 million in an auction to buy the very first version: VIN number 0001. Of course, Hendrick is not a fair barometer to gauge real demand. As the owner of 94 car dealerships, his life story is far from ordinary.

Still, enthusiasts are raving about the new Corvette, which leads us all to believe that GM has introduced a gamechanger. One of the pivotal reasons for this is the debuting car’s price point. At only $60,000 for the base model, the C8 will theoretically attract several newcomers to the Chevy brand.

Furthermore, executives are hoping that it will snag some snobby enthusiasts, such as Porsche drivers.

Certainly, it’s a compelling package. With a relatively affordable entry point, combined with strong Chevy reliability – again, relative to supercars – the Corvette is a winner. But for GM, what they really need is a resounding success.

This is where things get a little tricky.

The Corvette Has a Surprisingly Spotty Sales Record

According to data compiled by the Automotive News Data Center, the Corvette’s sales record is rather shoddy. You can color me surprised. In my prior estimation, I thought that increasing automotive technologies and higher performance metrics would increase demand. 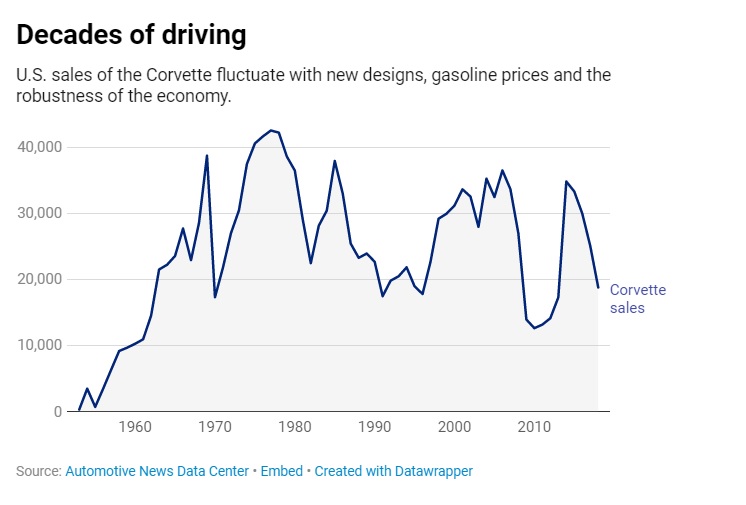 But as you can see from the above chart, Corvette unit sales peaked in 1977 at 42,571 units. Since then, sales have trended downward in a defined bearish channel. Even the hype of the last-generation C7, with 34,839 units sold, couldn’t come close to the 1977 tally.

Personally, I think that’s just weird. Even though I’m not at all a domestic car fan, I believe the C7 is a beauty. Plus, it has all the accessories and safety features that simply didn’t exist several decades ago. Yet the Corvette overall continues to slide.

As such, GM needs to put up convincing numbers. I’m not talking about merely approaching or equaling 1977’s record. We really need to see something groundbreaking to justify General Motors’ existence in the U.S. automobile market.

Since 1968 when the C8 debuted, the average growth rate for Corvette launch years is 12.84%. Applying this rate to the 1977 haul, we come to a 2020 unit sales of 48,037. That might dwarf modern Corvette launches but it’s really the minimum that GM needs.

Anything less and it will prove that a cheap supercar subsegment simply doesn’t exist in the present landscape.