Why You Absolutely Must Consider Gold and Silver

Over the last few sessions – and excepting the most recent two – gold and silver prices have been on a tear. As the more speculative of the two main precious metals, silver has reignited interest among beleaguered commodities investors. In the month so far, the white metal has jumped over 7%. Even more impressive, it incurred two down days before closing out last week.

And why has bullish demand sparked so suddenly in gold and silver investments? The answer is a simple, straightforward one. Lately, economic experts have predicted that the U.S. Federal Reserve will likely cut benchmark interest rates. Initially, such a move sounds counterintuitive. At least on the print, the economy is moving along relatively well. Just as importantly, the unemployment rate is trending at multi-year lows. 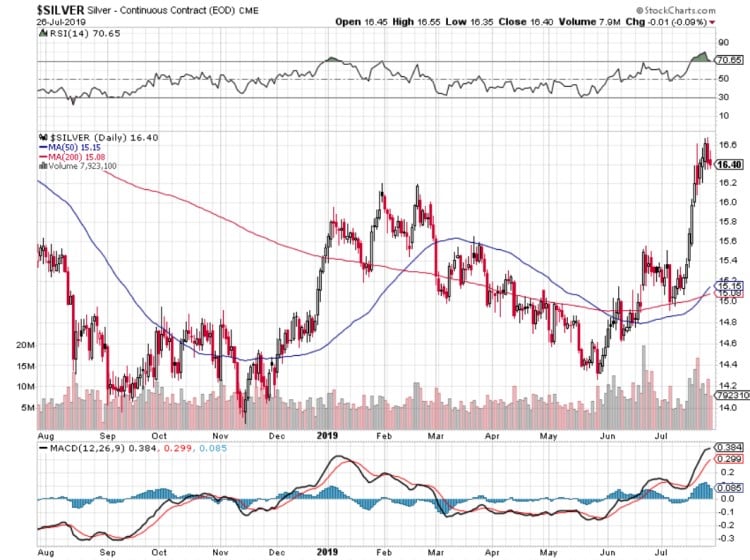 Essentially, anyone that wants a job can find one. That bodes well for key metrics like housing prices. Indeed, in many high demand areas such as southern California, housing prices have blown through the roof. To bring about some sanity in the housing sector, the Fed should actually raise interest rates. And that specter has clouded gold and silver prices.

But now, the central bankers have reversed course on the expected approach. Instead, they’re doing something incredibly counterintuitive. Because of this strange dynamic, we can probably expect gold and silver to continue their trek higher.

Gold and Silver Narrative Will Return to Rationality

I’m extremely excited about this current phase in the precious metals market, and you should be too. Finally, this sector is turning toward a potential era of rational trading, where these safe-haven assets will move based on their fundamentals.

When you think about it, gold and silver prices should have launched long ago. We’re in an unsustainable debt crisis. Furthermore, we have both internal and geopolitical flashpoints that are threatening to boil over. Several problems require financial resources to resolve, and these are resources that we don’t have net of debt.

But prices have been suppressed, and I’m not necessarily talking about the controversy regarding outright market manipulation. Rather, investors tempered their sentiment toward the metals because of monetary policy. Broadly, they figured that the Fed will do something, anything to kickstart the economy toward the right track.

And they’ve done that, again at least on paper. But with the likely decision to lower interest rates, the Fed proved they’re just as panicky about global economic slowdown as the rest of us. They don’t have the answers, which means that the answers lie in proven assets like precious metals.

If you haven’t thought about this investment class, now’s a great time to do so.