Why You Must Protect Yourself Financially from the Coronavirus

Contrary to the spin the mainstream media is putting on the coronavirus, the outbreak is severe enough to warrant at least consideration regarding financial protective strategies. But even reading the mainstream broadcasts, the numbers almost sound apocalyptic.

According to the New York Times, the latest number of infected people has surged to 40,171. Within that figure, over 3,000 new cases were recorded in just the past 24 hours. Most of these new cases have sprouted in Hubei Province, the epicenter of the coronavirus outbreak.

Further, the death count has jumped to a staggering 908. This outrageous stat will only increase over the next several days. Irrespective of recent news coverage of a possible vaccine on the horizon, health officials in China are likely no closer to a solution.

For reference, the coronavirus is now more deadly than SARS was in terms of case numbers and deaths. According to the Wall Street Journal, the SARS outbreak infected nearly 8,100 people and claimed 774 lives.

Although the mainstream stats are shocking on their own, the actual figure is probably much worse. According to conspiracy websites, the death count could be nearly 25,000 people and perhaps more today.

Though I don’t want to give too much credibility to outlandish, questionable sources, they might be onto something.

In March 17, 2003, the World Health Organization reported that 167 people were infected with SARS. Out of this figure, four people had died from the virus. About two weeks later, the infected count skyrocketed to 1,622 with 58 fatalities.

Folks, this is a crisis for which neither China nor the global community is prepared. 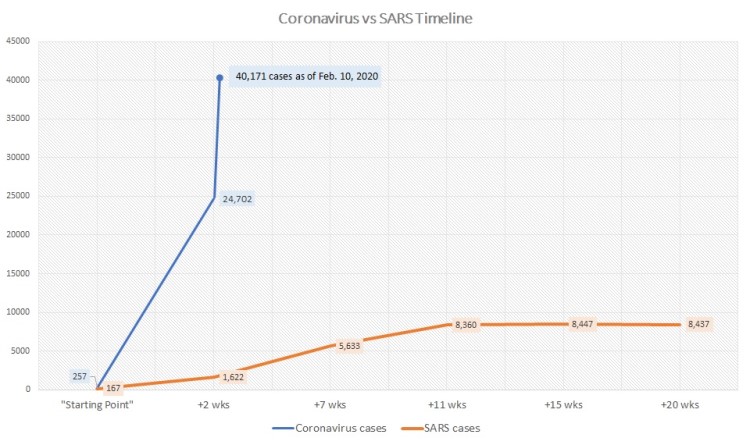 Simply put, the acceleration of infection with the coronavirus is on an exponential scale. Thus, we should expect an exponential impact. Now, I’m not going to speculate how bad it will get. But just the comparison alone is enough to send shivers down your spine.

Fortunately, we have a President that is more than willing to protect the American people. Therefore, I’m not worried about the virus crossing over and causing a pandemic here. However, the impact to the economy and to the investment markets could be more sizable than the mainstream is letting on.

Remember, China is the world’s second-biggest economy. The international community has key business interests there. Put the two together and the concept of protectionary assets really sell themselves at this moment.