Whether the mainstream media wants to admit it or not, bitcoin has been the most groundbreaking, revolutionary investment of this generation. The king of the cryptocurrency complex has made multi-millionaires among its early adopters, and many others will soon follow suit.

But what even the most ardent advocates of the cryptos can’t deny is bitcoin’s inherent volatility. In the past week, the high-low variance of bitcoin was over 17%. During the past 24 hours, that variance was creeping towards 5%. While that sounds fairly high, remember — it’s nothing really unusual.

Consider that the paper markets are only open for six-and-a-half hours. As soon as bitcoin gets done with its 24-hour cycle, more than three-and-a-half Wall Street sessions have occurred. Thus, when we say that the weekly high-low variance for bitcoin is 17%, that’s the equivalent of more than a month of trading on the floor of the New York Stock Exchange!

So no, bitcoin isn’t nearly as volatile as the mainstream media makes it out to be. To further ease your mind, let’s review some quick technical facts about the king of cryptos:

Look at the Big Picture

The interim choppiness is tough to handle, even for hardened bitcoin investors. Nevertheless, it’s helpful to look at a longer-term chart. 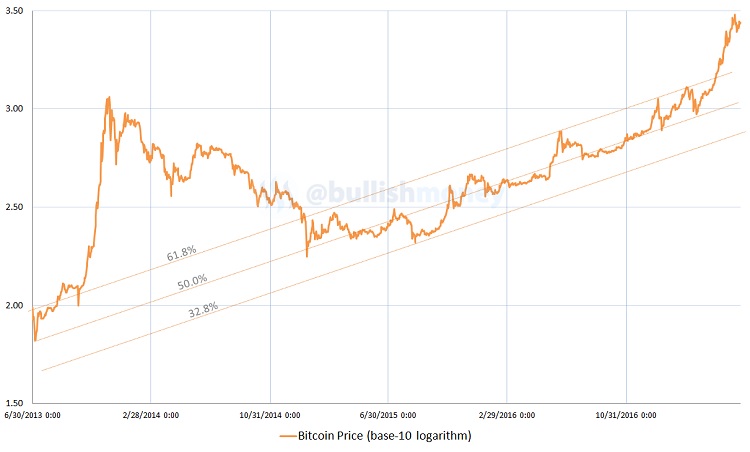 According to bitcoin’s base-10 logarithm price chart, the cryptocurrency has charted a bullish trend channel since late 2014, early 2015. This is about as robust of a channel that you’re going to see in any of the tradable markets.

Again, the trend channel is extraordinarily robust. The vast majority of bitcoin’s long-term price action rides the 50% line, while upside moves have been capped at the 61.8% ceiling.

Correction Will Come, but So Will the Rally!

What makes this present jump so spectacular is that bitcoin blew past the 61.8% trend line. This, however, should not be viewed as a panicked situation, but rather, as a simple expression of tremendous bullishness.

Will this outsized performance correct? I believe it will. But don’t forget that the cryptos are extraordinary assets. The correction will come, but the next rally will make you forget all about the prior volatility.