Bye-bye, Miss American Pie: When Will the Middle Class Get Their Piece?

What a tragedy it is: the promise of the American Dream, once held sacred in previous generations, has become the punch line of a cruel joke. Perhaps the saddest part of it is that the American public willingly relinquished its rights and freedoms – Democrats, Republicans, all of us allowed this to happen.

Amazingly, the populace itself has given its power to the richest 0.01% so fully that the wealth gap has become a fact of life, part of the fabric of American society as we know it today. This is precisely the type of plutocracy that our Founding Fathers were trying to avoid, but here we are and it’s only getting worse.

I recall reading George S. Clason’s classic book The Richest Man in Babylon for the first time and immediately understanding the value of Clason’s principle that you should save at least 10% of your income. As I grew older, I came to the realization that this principle is practiced almost exclusively by the wealthy, most of whom would prefer that middle-class Americans not practice sound principles of money management.

It’s a disconcerting fact that half of middle-class Americans don’t own any stocks at all while the top 10% of families control about 84% of the stock market. Let that sink in, especially if you’re of the opinion that the stock market isn’t heavily manipulated. I teach stock-market, commodities, and Bitcoin investing as avenues to wealth building, but the American public is encouraged to spend, not to save and invest.

Owning a home could be considered an investment, but Americans have become increasingly barred from homeownership. In the United States, the homeownership rate has fallen to around 60% from close to 70% just 15 years ago. Nearly 8 million Americans lost their homes in the recession, and with home prices high again, millennials and other age groups have become perpetual renters by necessity.

Given the widening wealth gap, it’s easy to see why populism has trended in recent years. In the past decade, the wealth of the top 1% grew by around $16 trillion, which is a third of the equity that was created. The median net worth of the wealthiest 1% has increased exponentially while middle-class wealth has flatlined for many years:

Consider this: from 1979 until the present time, the top 1% have gone from earning 9% of the income to 22%. Since the mid-1970s, more than 50% of the income growth has been accrued by the top 1%; meanwhile, the bottom 20% earn less than 1% of the total income. Declining wages, no real estate holdings, and very minimal market exposure have all contributed to a middle class that’s as oppressed, suppressed, and repressed than ever.

If you’re going to break the cycle, don’t count on the government or the bankers to save you: you’ll need to fend for yourself, and I recommend starting with Clason’s idea of saving 10% of your income from every paycheck. Your savings can be divided between cash holdings, which can come in handy in an emergency, and investible assets including stocks, gold and silver, and possibly a small position in Bitcoin.

In other words, if you want to be wealthy then you need to do what wealthy people do: save and invest instead of spend and waste. Celebrities might flash their newfound millions and buy luxury cars and boats, but the multibillionaires of the world like Warren Buffett practice frugality, modesty, and the underappreciated science of compounding through their investments.

Or, you can choose to live like most Americans and believe the government’s narrative of prosperity for all. You can believe Fed Chair Jerome Powell’s wishful thinking that “the benefits of this long recovery are now reaching these communities to a degree that has not been felt for many years” and that “many people who in the past struggled to stay in the workforce are now getting an opportunity to add new and better chapters to their life stories.” 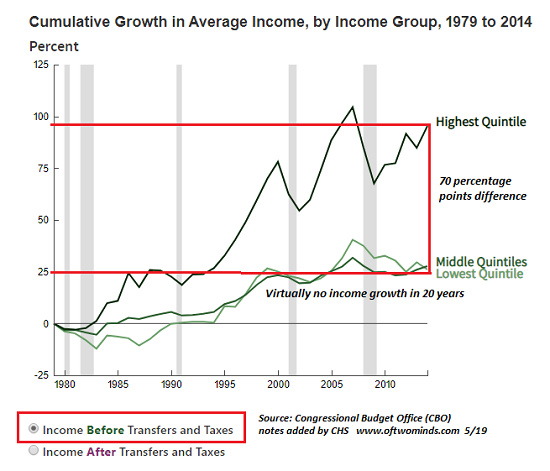 The data clearly shows otherwise, and the Federal Reserve’s fairy tales won’t help you if your job is lost to automation, outsourcing, or a global economic recession. Before you know it, being a member of the American middle class won’t be an option anymore because it simply won’t exist.

The solution is not more government, but self-sufficiency and self-reliance. Be your own caretaker, your own backstop, and your own safety net – or else, like the old song, you can say “bye-bye, Miss American Pie… for this’ll be the day that I die.”