Canary in the Coal Mine: A Checkup on Current Treasury Yield Curve Inversions

When U.S. Treasury yield curves flatten and then invert, that’s considered an alarm bell – the metaphorical canary in the coal mine, if you will – of an impending economic and market downturn. While Treasury spread anomalies aren’t necessarily the cause of financial turmoil, they do have a history of accurately predicting trouble ahead.

The percentage difference between the yields of two differently dated Treasury bonds is known as the term spread (or more commonly, just the “spread”), and the most commonly monitored spread is the one between the 2-year T-note and the 10-year T-note. There’s much debate surrounding whether this is, in actuality, the most significant spread, but it holds importance because the media tends to focus on that particular spread.

Besides, the 2-10 spread does seem to have some predictive power, as the yield curve between the 2- and 10-year Treasurys inverted prior to the U.S. recessions of 1981, 1991, 2000, and 2008. Indeed, the 2-10 inversion has preceded all nine U.S. recessions since 1955, though not always immediately: the lag time between the yield curve inversion and the economic recession has ranged from six months to two years. 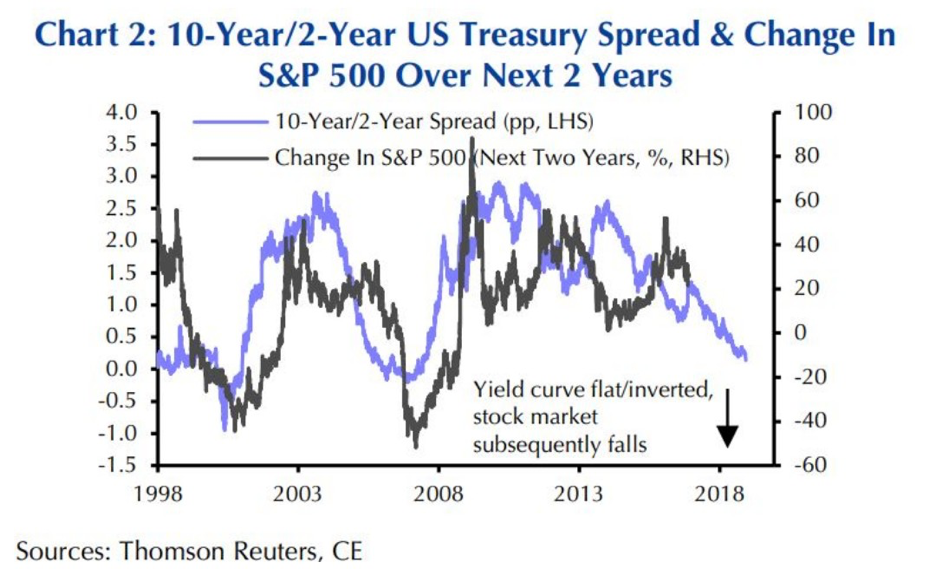 Capital Economics analyst Oliver Jones sums up the correlation well: “History suggests that once the Treasury yield curve becomes very flat or starts to invert, the stock market tends to struggle over the following couple of years, as the economy eventually starts to weaken.”

Just to give you an example, a 2-10 inversion took place in November of 2006, 14 months before the 2008 recession began. So yes, yield curve inversions are a big deal; besides just being weird, yield curve inversions indicate that investors are worried about the economy and stock market over the next several years, so they’re flocking to long-term bonds, causing the yields on those bonds to fall (they’re in demand, so they don’t need as high a yield to attract investors).

As I’m writing this, the 2-10 term spread stands at a mere 21 basis points (i.e., 0.21%). Pulling up the multi-year chart, it’s not difficult to see that the 10-year and the 2-year Treasury bond yields have been converging for quite a while now:

That’s unnerving in itself, but my concern isn’t just about the 2-year and the 10-year. On December 3, 2018, the yield curve between the 3-year and 5-year T-notes inverted for first time since 2007. Is it a coincidence that this was immediately followed by the worst December for the S&P 500 since 1931, when the nation was mired in the Great Depression?

And it wouldn’t take much to push the 10-year below one or more of the shorter-duration yields. We’re in Bizzaro Land, folks, and the future ain’t bright from where I’m looking.