Car-mageddon: Why We Should Care About Flagging Automobile Sales

Watchful financial commentators have been talking about the retail-pocalypse and the declining housing market of late, and those are certainly fair indicators of an American economy in jeopardy. Yet, we must not ignore “car-mageddon,” the precipitous decline in automobile sales, as an equally telling indication that the “Great Recovery” is more fiction than fact.

The problem has been going on for years, but really started to snowball in the summer of 2018, when the media was too busy praising Amazon to notice that the Big Three – Ford, General Motors, and Fiat Chrysler – were bleeding capital. In July, General Motors lowered their profit outlook for the year by 5% to 9%, as their North American operating profits had fallen 23% for the quarter.

That same month, Fiat Chrysler slashed their full-year earnings guidance by around 7%, while Ford’s numbers were perhaps the ugliest of all: their Q2 earnings declined nearly 50%, total revenues fell 2.4%, and they slashed their earnings projections for the full year by about 11%.

Stock share prices of the Big Three car manufacturers plunged during that summer. Not since the 2008-2009 financial crisis had America witnessed such poor simultaneous earnings performances by the three Detroit automakers. And the economy was supposed to be chugging right along at that time, with the government touting robust jobs and GDP growth numbers. 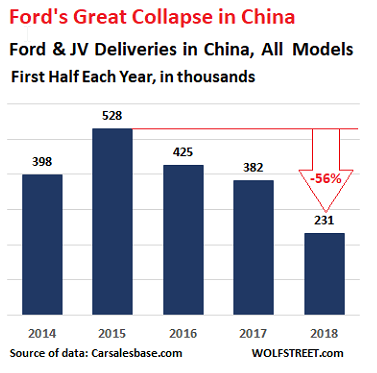 But no government-produced statistics can change the fact that the auto industry is ailing: they’re just not selling cars like they used to. And it’s not only happening in America: Nissan reported a 15% sales decline in August, and in November European automakers suffered an 8.1% year-over-year drop-off in new car registrations – the third consecutive month of such declines.

Back in Michigan, the carnage continued through the end of 2018 as American carmaker layoffs and plant closures rocked the industry. In October it was projected that Ford would reduce their workforce by 12%, resulting in a loss of around 24,000 workers, and reports of General Motors’ plans to lay off 14,800 factory workers and white-collar employees emerged in December.

Anyone hopeful of a turnaround in fortune for 2019 has been sorely disappointed so far. January’s sales numbers were deeply discouraging, with General Motors’ sales numbers falling 7% versus estimates of -3.7%, Nissan and Toyota reporting losses that were worse than expected, and Fiat Chrysler and Honda seeing modest gains falling well below expectations: 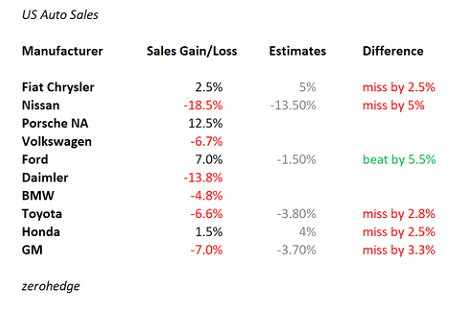 In early February, General Motors employees were hit hard with the announcement that the company will commence at least 4,000 involuntary layoffs, with a GM spokesman saying that “the involuntary reductions would happen in the first quarter.”

Of course, these automakers prefer to use euphemisms like “restructuring” rather than “layoffs,” but that’s not much comfort to the former employees, many of whom had been working there for years or even decades.

And as expected, we’ve heard plenty of excuses for the automotive industry’s poor performance: a particularly cold winter, rising interest rates, the government shutdown, the tariff war with China… and yet, they never just want to admit that car sales are low because the national and global economies are in terrible shape.

The signs are there if we’re willing to see them. Consider the chilling statistic that the number of auto loans at least 90 days late exceeded 7 million at the end of 2018; this is the highest in the two decades the Federal Reserve Bank of New York has been keeping track. 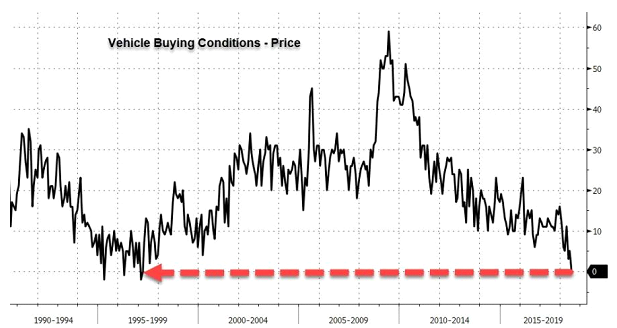 More Americans than ever are three months or more behind on their auto loans, and the millennial generation is opting out of car ownership more than previous generations. At the same time, micro-mobility companies like LOOPShare Ltd. (TSX-V:LOOP, OTC:LPPPF) are flourishing as big-city travelers opt for more efficient modes of transportation.

As for the car market, even the Fed is admitting that flagging sales are indicative of something amiss in the broader economy, stating that “disappointing dynamics in sales and delinquencies in the auto sector could be a foretelling sign.”

A foretelling sign, indeed, and one that all concerned citizens should be taking very seriously. Instead of shifting the blame, we should consider the “car-mageddon” a symptom of an economy in decline – a car wreck, if you will, that’s happening in slow motion.