Could the Gold Price Catch Up to the Dow? Look to the Fed for Clues

The COVID-19 pandemic has thrown all asset classes for a loop. Precious metals have been hanging in there, though. If anything, the health crisis – which is morphing into a financial crisis – is demonstrating gold’s value as it has no counterparty risk.

By “no counterparty risk” I mean that it requires no entity to fulfill an obligation or pay what it owes. The entity in question here is the world’s governments and central banks. Holding cash might seem completely safe, but it’s only valuable if the government that issued the cash refrains from making it nearly worthless.

The same can be said about government bonds. For generations, bonds provided a comparatively risk-free yield. Nothing less than a complete collapse of the government would invalidate those bonds. At least, that was the perception. The reality is that the government itself has the power to make those bonds as worthless as the paper they’re printed on.

Think about it: when bonds yield nothing, it’s all risk and no yield. And when they yield less than nothing, that’s the government taking money out of the hands of the citizens. We’ve actually reached that point already in America as the yields on the 1-month and 3-month Treasury bills fell below zero in late March. 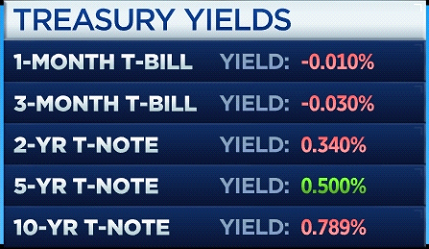 In Germany it’s even worse, with all government fixed-income instruments except for the 30-year bond having sub-zero yields. France, Denmark, and Sweden also have most or all of their government-debt instruments carrying zero or negative interest rates.

As for cash, I’ll grant that the U.S. dollar’s been on a tear lately. That’s not due to any actual gain in intrinsic value. The demand for the dollar is mainly due to a knee-jerk reaction to the stock-market rout. Just as people irrationally stockpiled bathroom tissue when the coronavirus came to America, they irrationally hoarded dollars when the equities market tanked.

That might sound gold-bearish, but gold has held key levels with relatively little volatility. Last year at this time, gold was much more volatile than it is now. At that time, gold fell below $1,300 an ounce and the gurus were predicting sub-$1,000 gold.

The gurus were wrong as usual; if you had listened to them, you would have sold your gold at the bottom and missed out on its run-up to $1,600. You also would have missed out on exceptional returns in select mining stocks as Crush the Street has been picking winner after winner in its exclusive reports.

Much of the success has been based on picking resource companies that mine gold at low AISC, or all-in sustaining costs. If gold is worth $1,600 per ounce and a mining company’s AISC is less than $1,600 per ounce of gold, that presents a highly favorable reward-to-risk profile for investors. 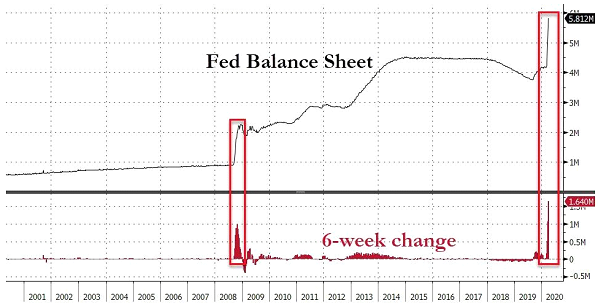 At the opposite end of the spectrum are government bonds and fiat money, which present a very poor reward-to-risk profile for investors. As long as the Federal Reserve persists in buying government bonds (and now risky corporate bonds and mortgage-backed securities as well), there’s little if any reason for investors to hold these assets.

People have called this fifth cycle of asset-buying “QE Forever,” but it should really be called “Gold Forever.” Gold’s been valuable for 5,000 years and you can count on another 5,000 years of financial security in these enduring hard assets.

Pierre Lassonde predicted that the Dow Jones Industrial Average and the gold price would be the same, and this is a distinct possibility given gold’s positive catalysts. It’s happened before: back in the 1930’s the Dow and gold were both $35, and in 1980 they were both $800.

Could they achieve parity again? Given that gold has been in a bull market since the Federal Reserve was created in 1913, we have to view it as not only possible but probable. Whether it’s at $10,000 or $20,000, the government’s money-printing and asset-buying activities will ensure that gold catches up to the stock market – and even overtakes it, as it ought to.