Critical Condition: A Handful of Stock Picks for Turbulent Times

Friday, August 23 was one heck of a day for Wall Street. Not one, but multiple catalysts set off a stock-market cascade in tandem with a bond-yield rout that shook investors to the core. Is there anything “safe,” or at least less precarious, in this troubling market environment?

Before answering that question, let’s recap what happened: the yield on the 10-year U.S. Treasury note declined to 1.535%, below the 2-year yield of 1.513%, thereby inverting the yield curve for the third time in less than two weeks. The yield-curve inversion is a well-known historical precursor to stock-market crashes, though this could take anywhere from 6 months to 21 months to happen.

On that same fateful day, Federal Reserve Chairman Jerome Powell openly admitted that trade policy uncertainty is playing a role in the global economic slowdown. Also on that day, China announced that it will levy additional tariffs on $75 billion of U.S. goods and will resume auto tariffs.

President Trump’s tweet-storm followed, which sent the stock market into a tailspin even as bond yields were plunging. The NASDAQ and the Russell 2000 both declined 3% by the end of the trading day as the President asked whether Jerome Powell or Xi Jinping is the bigger enemy of the United States.

What spooked the markets the most, though, was (again, on that same day) Trump’s retaliatory escalation of the tariff conflict:

All of this leaves investors wondering how to proceed amid the volatility: should we all just hoard cash and hope for this to blow over? Personally, I don’t believe in making decisions based on fear; besides, there are always opportunities in the markets, if you know where to look for them.

One place to look is emerging markets, which have been lagging behind U.S. equities for a while now. The MSCI Emerging Markets Index, which represents companies in China, India, and 24 other nations, includes 1,193 constituents with some well-known names like Alibaba, Samsung, Tencent, and China Mobile.

The MSCI Emerging Markets Index declined 14.57% last year and is having a rough 2019 so far – much worse than the S&P 500, for instance. I’m not telling you to load up on emerging-markets ETF’s, but if you believe that this trade war won’t last forever, here’s an opportunity to invest in some of the international companies that have been hit the hardest.

If you feel compelled to invest in American blue-chip stocks, then I would suggest that you at least concentrate on dividend kings that have survived multiple market downturns. Ten of my favorite selections in that category would include the following:

Those are all large companies with plenty of capital, brand-name recognition, and generous dividend payouts to help carry you through a market downturn when it happens. These companies have survived recessions before and, barring an unthinkable calamity, they should persist through the next one.

Even though my top-ten list included some of the most enduring companies on the market, don’t get the impression that you need to buy them with reckless abandon; all American companies are vulnerable as long as the trade war persists. One thing that hasn’t shown vulnerability, though, is an asset class that thrives in times like these: precious metals. 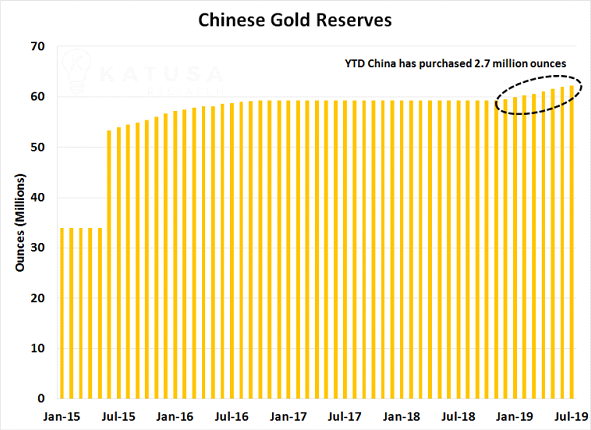 Want to know why countries like China and Russia have been ramping up their gold accumulation? It’s simple: they know that hard assets do extremely well when central banks go on rate-cutting sprees, and they understand precious metals’ historically proven ability to retain their value when the equities markets are crumbling.

If you’re collecting gold and/or silver in anticipation of these events, I commend you for exercising your right to defend yourself against central-bank malfeasance and government-perpetrated fiscal mismanagement. Along with holding physical precious metals, it’s also possible to buy gold and silver stocks through your brokerage account, even if it’s a retirement account.

If you choose to buy precious-metals stocks, just be sure to get the latest research and learn how to identify the best companies in the sector – that’s what we help you do here at Crush the Street, and will continue to do so you can invest wisely even in these turbulent times.