Debt Collector: America Is on Track to Being Wholly Owned by Foreign Interests

When I talk about the $23 trillion in U.S. government debt, I’m concerned that people aren’t shaken by that number. I’m worried that America’s citizens can’t process or visualize that magnitude of debt – or that they don’t want to even think about it.

But even beyond the sheer size of the debt, I wonder if people really appreciate the obligation that the debt represents. After all, when you’re indebted to someone, that person essentially owns you; he can make your life difficult until you’re released from the obligation that the debt represents. (If you’ve ever received debt-collection calls or had wages garnished from your paycheck, you know exactly what I’m talking about.)

Regarding the $23 trillion dollars of U.S. debt, 39% of it is owned by foreign investors and that number just keeps growing. Even if the percentage of foreign-owned debt doesn’t increase (though I’m quite confident that it will), the dollar amount will increase as the total debt amount continues on its upward trajectory.

If I were to poll Americans on which country owns the most U.S. debt, they’d overwhelmingly say China, and I wouldn’t blame them for saying that. China’s trade war with the U.S. has been in the headlines on a daily basis for a year and a half now, and it’s common knowledge that much of America’s debt is owned by China.

It might surprise you to learn, then, that China is actually not America’s largest creditor: 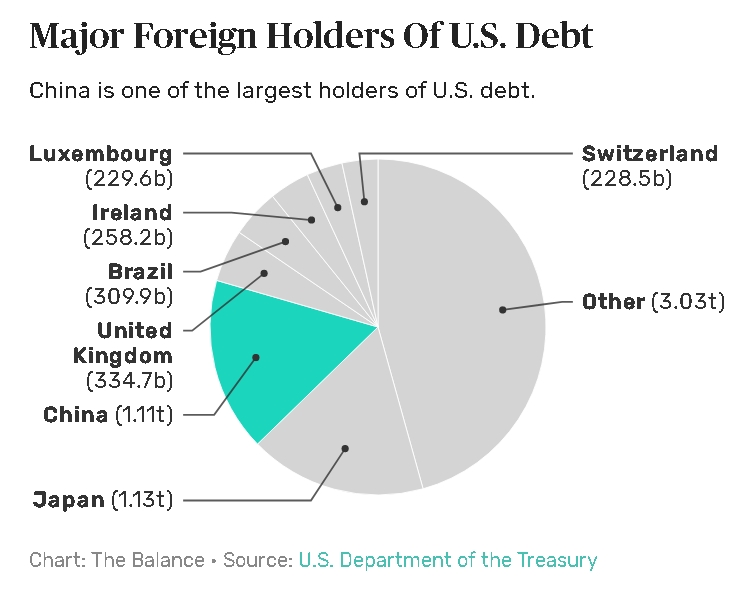 Interestingly, Japan with $1.13 trillion in American debt actually beats China’s $1.11 trillion. Note, though, that this is only the national debt – mostly Treasury bills and notes and similar securities – and doesn’t address the massive quantities of American real estate, businesses, and other private assets held by Chinese interests.

And so, while it might feel good to know that America is in a full-on trade war with China, few people actually understand what would happen if China were to sell its U.S. debt holdings. “Calamity” wouldn’t even be sufficient to describe such a scenario; knowing this, China continues to wield tremendous political leverage as America cannot afford to have China pull the debt-collection trigger.

When we fully understand this, the U.S.-China currency war makes a lot more sense. When America takes steps (i.e., large-scale money printing) to devalue the dollar, the U.S. debt held by China becomes less valuable; that, in turn, weakens China’s leverage over the U.S., at least temporarily.

Moving outside of Asia, most people would be surprised to learn that so much of America’s debt is owned by the United Kingdom, Brazil, Ireland, Luxembourg (which many Americans wouldn’t be able to locate on a map), and Switzerland. And speaking of Switzerland, the data indicates that the Swiss National Bank owns a sizable and growing swath of the American stock market: 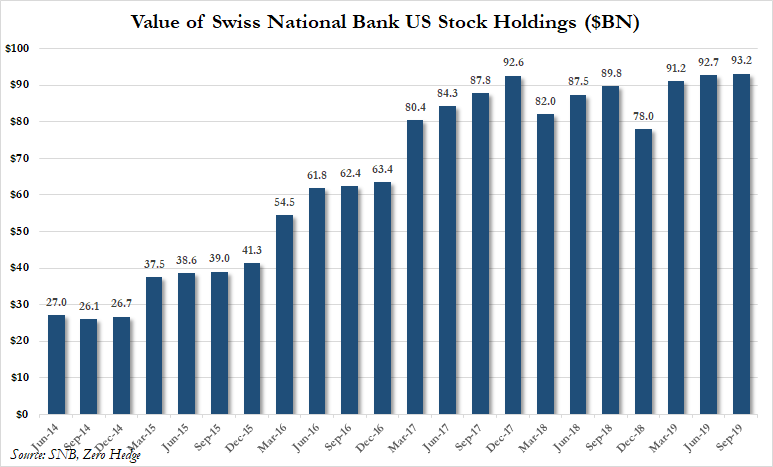 That’s another way for foreign investors to own a massive chunk of America: buy up the U.S. stock market. Quarter after quarter, the Swiss National Bank has been purchasing and hoarding American stocks irrespective of price, P/E ratio, or any other valuation metric.

Astonishingly, the Swiss National Bank currently holds $94.1 billion worth of U.S. stocks, a record high and a 1.5% increase in the third quarter compared to the previous quarter. In case you’re curious what they’ve been loading up on, the Swiss National Bank’s top holdings are Apple, Microsoft, Amazon, Facebook, and Google/Alphabet stock (heavy on the techs and FAANGs, as you can see).

Thus, Switzerland is taking a different route than China in buying up America: they’re hoarding stocks, which are the lifeblood of U.S. businesses and the economy generally. Much like Warren Buffett does with Coca-Cola and Kraft Heinz, Switzerland could conceivably control America by controlling its stock shares.

It’s disconcerting to consider that your country isn’t really yours, as foreign-sourced economic leverage drains a nation’s autonomy and, ultimately, its freedom. And unlike the bill collector who harasses you on the phone, creditor nations can’t just be hung up on – painfully and inevitably, accounts will be settled one way or another.