In a nation with a nearly $22 trillion debt and tuition costs rising every year, perhaps it shouldn’t be surprising that U.S. student loan debt is sky high. To learn that the amount of student debt has literally doubled since the Great Recession, however, is beyond the pale.

Back in June of 2009, the $675 billion student debt in America was already unmanageable. But last month it reached a record $1.465 trillion, practically guaranteeing that millions of college and university students will be in arrears for years or even the rest of their working lives.

One particular group of students – those who took out loans in 2012 – have been hit especially hard, having defaulted at a faster rate than any other loan cohort since 2009: 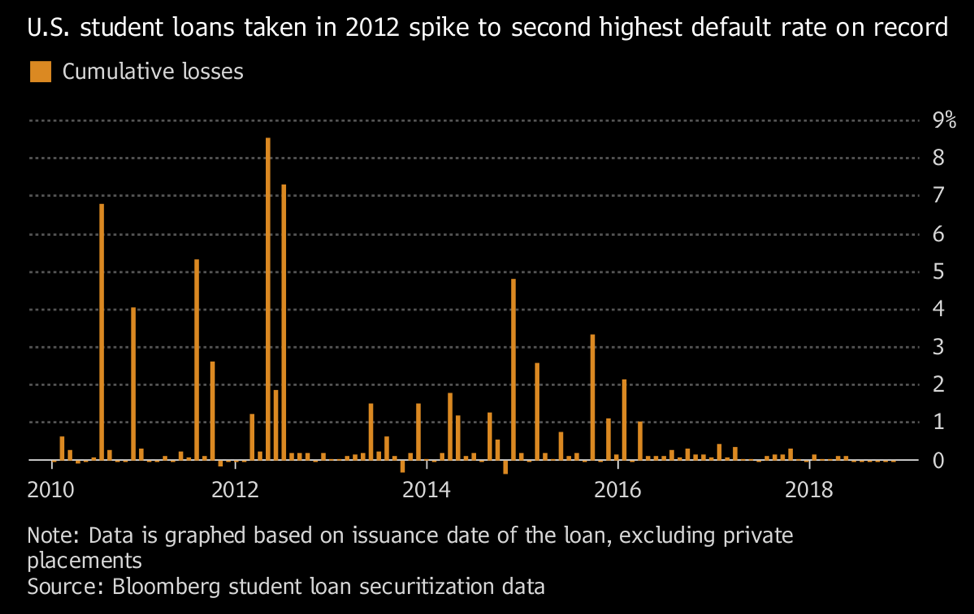 This disparity could be accounted for by changes in employment opportunities: according to data from the Bureau of Labor Statistics, finding a job in 2012 took almost three times longer than it would today.

All of this debt isn’t just bad for the students, as it’s raising fiscal risks for the nation at large. As explained by Paul Della Guardia, economist at the Institute of International Finance, “Over 90% of student loans are guaranteed by the U.S. Department of Education, meaning that if a recession causes a rise in youth unemployment and triggers mass defaults, this contingent liability could prove burdensome for the U.S. government budget.”

There are some surprises when we break it down by age category. 35-to-49-years-old borrowers are the most indebted, owing $530 billion; second place goes to the 25-to-34-years-old age group, which owes $489 billion.

But the burden of student loan debt isn’t exclusive to the young: according to the U.S. Department of Education, the 50-to-61 age group owes $213.6 billion in federal student loan debt, while 1.8 million borrowers aged 62 or over owe $62.5 billion. In fact, the total amount owned by borrowers over the age of 50 has increased by $28.8 billion or 11.6% in just one year.

Exactly how these millions of current and former students are going to repay their debts, along with the interest on those debts, is anybody’s guess. A poll conducted by advocacy group StudentDebtCrisis.org found that a majority of student loan borrowers have less than $1,000 in their bank accounts; and recent data indicates that student loan debt is the most likely debt type to go delinquent for 90+ days: 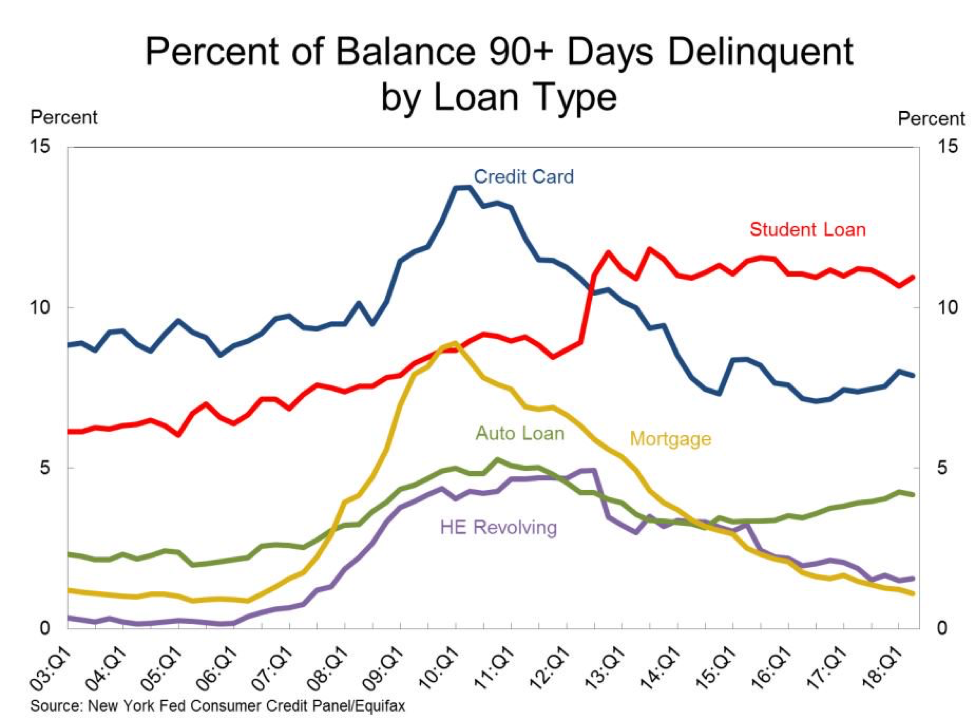 “People are terrified of how they’re going to be 40 years from now,” says StudentDebtCrisis.org Executive Director Natalia Abrams. I’ll take it a step further: I’m terrified of what’s happening right now as the student loan debt bubble stretches to the breaking point.