What Does 2018 Hold for EOS? How Will it Affect Ethereum?

What Does 2018 Hold for EOS? How Will it Affect Ethereum?

It’s no secret that blockchain tech is one of the hottest things in the technology space at the moment. We’ve seen how it can make established procedures more efficient and cost-effective, and protocols like Bitcoin have brought a new way to settle payments and store value…

In recent years, programs, applications, or “apps” have changed our digital experience to the point where we can literally download an app for banking, shopping, trading, and even socializing.

While Bitcoin was built mainly for payments, the blockchain can be used for much more. We are beginning to see this with protocols that use something called smart contracts or smart assets, such as Ethereum, NEM, Cardano, and the highly anticipated EOS.

By utilizing this “smart” technology, applications can be built on top of the blockchain, enabling a new Internet of Things or Internet 2.0 to be built. In time, applications could host smaller applications within themselves, similar to popular Chinese messaging app WeChat.

Since the development of second, third, and now fourth generation blockchains, the ultimate goal is to a provide a scalable network with an economic incentive for users and developers alike.

Bitcoin and Ethereum are some of the examples that show how a blockchain can become expensive and slow to use and build on if it cannot grow in its usage capabilities.

How Does EOS Work, and What is It?

EOS aims to revolutionize the entire blockchain landscape, providing “The most powerful infrastructure for decentralized applications,” with the ability to harness one million transactions per second with zero network fees…

Backed by chief technology officer and developer of BitShares and Steemit, Daniel Larimer, EOS seeks to become the scalable alternative to Ethereum, providing tools and features to assist developers in a much simpler manner.

The EOS protocol is taking a different approach, aiming to develop an operating system-like architecture for decentralized applications. 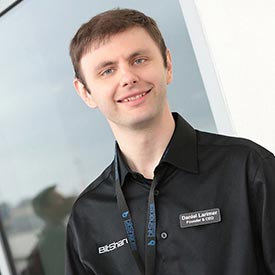 “The resulting technology is a blockchain architecture that may ultimately scale to millions of transactions per second, eliminates user fees, and allows for quick and easy deployment and maintenance of decentralized applications, in the context of a governed blockchain” – EOS Technical Whitepaper V2

A simplified way to understand this concept is how the Windows operating system runs programs on top of its own system, allowing users to have a wide selection of programs built for unique tasks, such as Paint, Word, or Photoshop.

While still using Microsoft’s operating system, you are still able to utilize multiple applications or programs.

So by using the EOS protocol, developers can build decentralized and open source applications (dApps – decentralized applications), allowing technical talent across the globe to use the tools provided while users benefit from a potential Internet 2.0 ecosystem.

At the moment, EOS is still in its ICO phase until June 1st 2018. A test net version of the protocol named EOS Dawn 3.0 has been recently released for developers.

DPOS works like a voting system, where anyone holding tokens on a blockchain linked to the EOS protocol can select the block producers through a democratic approval system.

The amount of blocks that can be produced is in proportion to the amount of votes received by the EOS community.

A key disruptive feature for EOS is that Ethereum-based applications are also compatible with the EOS system.

Successful Ethereum-based projects with large amounts of funding from ICOs can shift to EOS, capitalize on its scalability and zero network fees, and ultimately take advantage of the tools provided by the EOS operating system.

This means that your registered EOS tokens will be copied over to the newly-launched EOS blockchain, which can also be done with any other Ethereum application, meaning OmiseGo, TenX, Golem, and many other successful ICO projects could follow exactly the same procedure (in theory).

(Please remember to generate your EOS cryptographic key pair and register your Ethereum address ASAP if you hold EOS tokens. The deadline is June 1st, 2018. DO NOT RELY ON EXCHANGES OR WALLETS – do it yourself! This tutorial will show you step-by-step, and it is a five-minute process.) 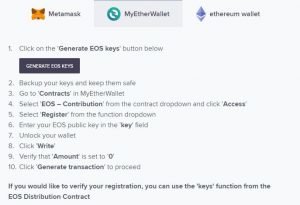 An ERC-20 token requires “Gas” to process transactions on the Ethereum blockchain. EOS does not use this model. Transactions and information shared on its network cost nothing, which is a huge economic incentive, especially for a business with a strict budget.

What many people are not talking about is the potential impact this can have on Ethereum’s market cap. While Ethereum will still run normally regardless of EOS, a portion of its market cap is linked to the EOS ERC-20 tokens running on its blockchain.

When the tokens shift to EOS, we could potentially see Ethereum’s market cap react and change as capital leaves its ecosystem. Of course, this is just a theory and there is no way to know until the EOS snapshot happens in June 2018.

The Battle for Internet 2.0 Dominance Has Begun!

We now face a potential innovation race in blockchain tech. Since 2014, Ethereum has been the juggernaut and template of smart contracts and application development on the blockchain, especially for those familiar with the Solidarity language. 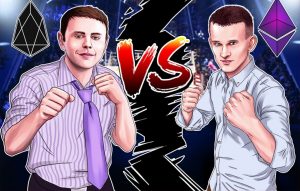 It now faces scaling and cost issues, which have given newcomers an excellent opportunity to muscle in, capitalize, and dominate on Ethereum’s home turf!

Newcomers such as EOS, Cardano, and even the off-chain Rootstock application built for Bitcoin are chasing down Ethereum’s first-mover advantage.

If EOS can truly perform, the blockchain community may witness a new rush of innovation, similar to what Ethereum triggered in recent years. It won’t be easy to topple Ethereum’s dominance, as Ethereum is a secondary digital standard to Bitcoin for the cryptocurrency space due to the amount of digital assets running on its network.

In this brutal downtrend, EOS has not been exempt, but with that being said, it has managed to retain more of its value in percentage terms than many other cryptocurrencies. 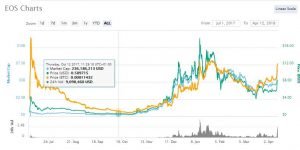 At the time of writing, EOS trades above $8.00 due to the recent release of Dawn 3.0 and other promising news.

Where EOS will go in 2018 is hard to say. The cryptocurrency markets are still in a strong downward trend, and we may see further price corrections before any significant reversal.

However, technologically-wise, it looks like 2018 will be EOS’ greatest year yet. With more features to be added and the ICO phase ending in June, we can finally see EOS running live and begin to fully analyze its data and compare it to rivals, such as Ethereum.

Disclaimer: This is not investment advice. Please research and only invest what you can afford to lose.

Please remember to register your EOS tokens and read the technical whitepaper to get a better understanding of this new technology.