It’s been another amazing week for cryptocurrencies. With a total market cap of $500 billion, $1 trillion is a very possible barrier to overcome!

The popular underdog Litecoin was always expected to breach the $100 mark at some point, but it peaked above $300, giving it a market cap that was briefly above $18 billion!

Understandably, Litecoin corrected slightly and is now trading for an impressive $260 at the time of writing, making this another brilliant and simplistic investment for anyone that’s been holding since last year. 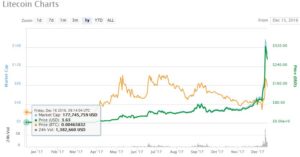 The image taken from CoinMarketCap illustrates how Litecoin’s price has literally increased by 100x within a year, with the activation of SegWit on Litecoin’s network igniting its price rally.

Unlike Bitcoin Cash and Dash, Litecoin is not attempting to take Bitcoin’s place, but rather complement it and be part of its ecosystem.

As silver is a more affordable and liquid alternative to gold, Litecoin offers similar features in relation to Bitcoin:

Many analysts in the cryptocurrency space say Litecoin’s price ratio to Bitcoin should be 1:10. If this is accurate, it could mean Litecoin is heavily undervalued.

Performing Well Against Fiat, Bitcoin, and Even Gold!

Litecoin has performed brilliantly for investors that are valuing their wealth in USD or other fiat currencies, but for many, the true objective in the crypto space is to make more Bitcoin.

Although altcoins have performed incredibly this year (when compared to fiat), the majority have not performed as strongly against Bitcoin, something many are beginning to notice as Bitcoin holds its ground at $16,000.

Let’s look at these images from worldcoinindex.com to see the difference. 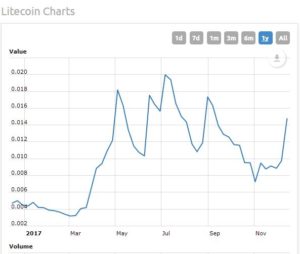 The image above shows LTC/BTC. In the last 12 months overall, Litecoin is up against Bitcoin, but on a more short-term basis, Litecoin has not performed so well in the second half of 2017.

Litecoin’s performance against Bitcoin is one of the better ones when compared to many other altcoins. 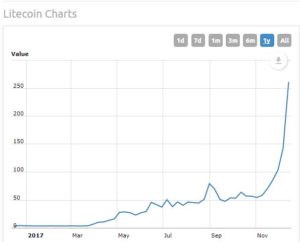 In this image of LTC/USD, it is a very different story. Litecoin has been the perfect investment against fiat, highlighting not only the weakness of fiat, but the increasing purchasing power Bitcoin is gaining.

For further insights, Litecoin has also performed well against gold. How you value your portfolio is important, and it is worth analyzing your portfolio to see which currency or asset it has performed best against.

Litecoin’s roadmap is an ambitious one. With atomic swaps, Rootstock, and even a privacy layer on the network, Litecoin activating SegWit truly awoke its huge potential.

At some point in the future, we could also see bigger blocks on Litecoin’s blockchain. Part of the agreement for activating SegWit was to increase the block size when Litecoin’s transactional capacity reaches 50%.

Always conduct full research before investing and only invest what you are willing to lose.