$400 Million Worth of Bitcoin DUMPED While SEC Gives Warnings AND Binance is Attacked!

$400 Million Worth of Bitcoin DUMPED While SEC Gives Warnings AND Binance is Attacked!

The Bitcoin price showed signs of escaping a bear market over the last few weeks, with a slow yet steady price rise above the $10,000 region and resistance being met just under the $12,000 mark…

However, within the last 24 hours, the price of Bitcoin and almost all other cryptocurrencies tumbled, with Bitcoin bottoming out in the $9,500 region (for now), triggering fear, confusion, and panic yet again in the cryptocurrency markets! 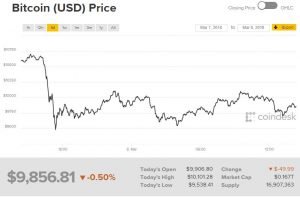 Why Did This Happen?

The big question is why the markets buckled. There are a number of valid reasons, although some may seem more influential than others. Below, we will take a look at the three most likely causes of the price pullback in the last 24 hours, as well as recent months (in no particular order of relevance).

Trading cryptocurrencies is the latest method of making money in the cryptocurrency space, and popular tools traders use to increase their exposure to the markets are trading bots.

To link the trading bots with their respective exchange accounts, users have to use the API (Application Programming Interface) to integrate the bot and allow it to conduct the trades.

A hacker likely exploited a vulnerability in a third-party application that relied heavily on the API keys to control the Binance accounts, resulting in users who use trading bots to lose funds.

It’s also worth noting that users who do not use the bot were unaffected by the attack.

The hackers placed a large number of orders for popular altcoin Viacoin, which saw its market cap increase from $64 million to $159 million in a matter of minutes!

Binance is the fourth-largest exchange in the world and has exploded in popularity in recent months, taking the attention away from other big exchanges, such as Bittrex, Poloniex, and Kraken. 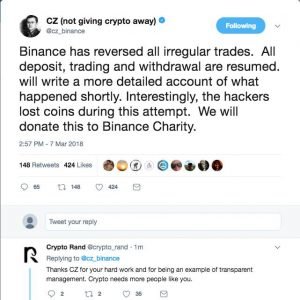 Despite the misery and fear caused by the attack, Binance halted withdrawals and reversed any irregular trades, with the hacker’s lost coins going to charity.

With more attempts to steal users’ funds and details, exchanges may find authorities knocking at the door in an attempt to prevent bad actors from taking advantage.

We previously covered the recent SEC/CFTC hearing that was positive overall towards cryptocurrencies, but with more than 80 ICOs subpoenaed by the SEC alone, the announcement given yesterday was always expected by those with the ability to think several steps ahead.

According to the SEC’s official report titled “Statement on Potentially Unlawful Online Platforms for Trading Digital Assets,” exchanges must register with the SEC as a “national securities exchange!”

Another problem that exchanges face is that they provide a platform for ICOs to be bought, sold, and traded on. The SEC looks at ICOs as securities, meaning many of the new projects we see launching in the space could be under the scrutiny of their department.

The statement further recommends investors to use registered platforms to benefit from the full protections offered:

“To get the protections offered by the federal securities laws and SEC oversight when trading digital assets that are securities, investors should use a platform or entity registered with the SEC, such as a national securities exchange, alternative trading system (‘ATS’), or broker-dealer.”

Ultimately, it is not an attack on cryptocurrencies, but a procedure to protect investors from bad actors and exchanges that may attempt to manipulate the market.

Mt Gox was the flagship exchange in the cryptocurrency space before closing down due to a theft of over 800,000 bitcoins in early 2014.

Due to the cryptocurrency community being considerably smaller at the time of the attack, Mt Gox was responsible for over 70% of the transactions on the Bitcoin network. By going bankrupt, it triggered a bear market that lasted until late 2015.

The events of Mt Gox still seem to be influencing the price of Bitcoin. Reports across the Internet claim that the bankruptcy trustee of Mt Gox has been selling an amount of up to $400 million of BTC and BCH in the last two months. 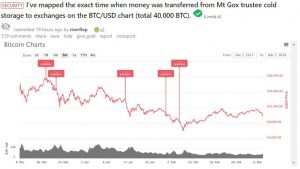 Diligent users on Reddit and Twitter have posted their findings and evidence linking the sell-offs to the recent price dips. It’s also worth noting that this has been ongoing since mid-December 2017 and has more of an influence on Bitcoin’s recent monthly price behavior, rather than the last few days. 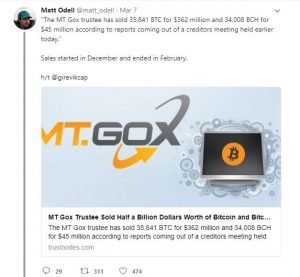 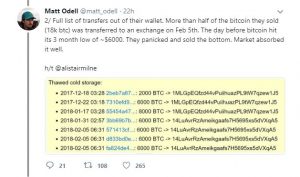 This would be a likely reason why Bitcoin has struggled to break the $12,000 resistance. It would be wise to expect further sell-offs over the short-term, and we will keep you up to date on any further developments with this!

As we have witnessed, the cryptocurrency markets can be “spooked” extremely easily and sometimes be subjected to fake news or “trolling.” The best course of action is to take a zoomed-out perspective of this space while researching thoroughly.

As Bitcoin is at a crossroads between a bull and bear trend, it is worth considering all potential contingencies before investing or trading, and only risk what you can afford to lose!