A.I. is Already Here – We Just Don’t Realize It! 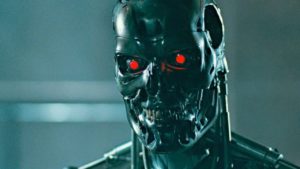 We are all familiar with popular movies and TV shows, such as Terminator, Star Trek, and I, Robot, which depict the rise of artificial intelligence and its almost limitless capacity.

In recent decades, humanity has slowly moved towards total dependency on technology. With the emergence of the commercialized Internet (ARPANET), the way we communicate and conduct business has been revolutionized.

The Internet automated our way of life. Opening a brokerage account is no longer exclusive to finance professionals, and seeking employment and searching for information is easily done from home.

With businesses not embracing the Internet’s capacity in the early 2000s, they quickly became distant and nostalgic memories of the old retro world we used to live in.

We only have to look at Blockbuster as a clear example of this. As YouTube and Netflix innovated and disrupted their respective industries, companies that were stuck in their ways and failing to innovate quickly found themselves declaring bankruptcy.

Fast-forward to 2018 and beyond. We now see the digital foundations fully settling in our global society. The vital trust in technology has been established (whether by design or not) and will prove critical for the next wave of automation that’s coming to integrate artificial intelligence for conducting day-to-day tasks.

Data is the new oil for businesses that are seeking to become online dominators. We have basic examples of the self-calculating or predictive technology that is gathering consumer information…

Google and Facebook algorithms often referred to as “spider bots” gather online browsing history and use this analytical data to understand our behavioral trends. Using mathematical calculations, they can “predict” what we are likely to do before we do it.

This technology has proven to be a game-changer. Facebook advertisements provide all the analytical data and demographics for a target audience, businesses no longer need to outsource to expensive marketing companies to understand their customers, authorities can build behavior patterns around people they are monitoring, and this is all automatically achievable with very little need for humans.

Sophia, the A.I. Robot, and the “Singularity”

A.I. machines like Sophia, the popular robot, will be able to accomplish the tasks mentioned above. Self-aware and self-teaching machines will do jobs that require an extended amount of time for a human to achieve and will do so in moments.

Sophia has taken the world by storm with its complex A.I. software and realistic facial expressions. Built and developed by Hong Kong-based company Hanson Robotics, Sophia seeks to start a family, have a job, and has been granted citizenship in Saudi Arabia.

The term “singularity” refers to when A.I. reaches a technological point where it surpasses its human creators (hypothetically), triggering changes to human civilization.

In a debate with another robot from Hanson Robotics, Sophia and the other robot discuss the singularity and their desire to make it happen!

By utilizing blockchain technology, separate A.I. can use the SingularityNET protocol to communicate and learn from one another while making A.I. services available to the world in a more accessible and scalable manner.

The SingularityNET protocol runs on the Ethereum blockchain and uses advanced smart contracts to fulfill its role. Self-aware A.I., such as Sophia, can connect with blockchains to send and receive information.

“SingularityNET is a protocol and a structure, implemented in smart contracts to create a Decentralized Self-Organizing Cooperative of AI. As such, it can be built on any open, decentralized framework that satisfies certain basic requirements.

It requires no special innovations in cryptocurrency or blockchain technology, and the initial implementation will be built on Ethereum, with smart contracts written in Solidity and designed to minimize the gas cost for network operations.

However, SingularityNET should be understood as a structure and dynamic, that can be implemented with various different cryptocurrencies and distributed ledgers, rather than simply as an Ethereum app.

Was Bitcoin a Product of A.I.?

With Bitcoin’s creator remaining a total mystery, many have theorized that Bitcoin was created by artificial intelligence.

Whether this is true or not is something you will have to decide for yourselves, but with numerous incidents of rogue A.I. bots creating their own programming languages far beyond the understanding of some of the world’s foremost computer scientists, the theory does have some realistic potential (as incredible as that sounds)! 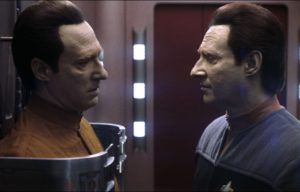 Like any digital platform, processing power is vital. Without this, a blockchain is worthless and A.I. can’t learn from the data to become more capable of fulfilling tasks.

Bitcoin’s overall computing power dwarfs the likes of Google and Facebook and uses up more electricity than the Republic of Ireland. If an A.I. had similar processing capability to Bitcoin or used Bitcoin’s processing power, such as how the Komodo blockchain does, it could have a serious advantage in its digital evolution.

The Moral Implications of a Self-Aware Machine

If we use self-aware robots to fulfill our day-to-day tasks, there could be moral implications. They may decide not to work for people, and it could even be deemed as a form of slavery.

If the singularity does ever happen, humanity will have to reconsider its moral high ground. Blockchain technology could be the gateway that allows A.I. to learn faster and connect to its fellow bots.

Full research is recommended. This is not investment advice or a prediction about future events. This article is for educational and insightful purposes.