Alpha Bay Down, With Rumours of Law Enforcement and Suicides Circulating! Does Anyone Know the Truth?

Alpha Bay Down, With Rumours of Law Enforcement and Suicides Circulating! Does Anyone Know the Truth?

Sharp Exit or Genuinely Down?

Since July 4th, the most popular dark net market, Alpha Bay, has been offline after what rumours have claimed to be a combined international law enforcement effort lead by the U.S. involving the arrest of Alpha Bay operator Alexandre Cazes in Thailand, who was found the next day dead in his cell from apparent suicide.

Alpha Bay was an online dark net market running on the Tor network, which went online in 2013 after the demise of Silk Road. Users were able to purchase weapons, drugs, stolen credit card details, and much more using Bitcoin and popular privacy-based altcoin Monero as the two native currencies on the site.

Users have been keeping up to date on the status of Alpha Bay and other dark net markets using DNStats.net.

Days following July 4th, before the apparent news of authorities mobilizing on Alpha Bay, many thought the site owners had abruptly exited (many still do!), triggering rage across the Internet, especially on Reddit! 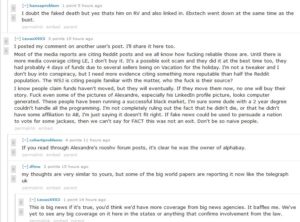 For some, Alpha Bay was the go-to site to purchase products, leading to many keeping large quantities of Bitcoin and Monero on their Alpha Bay escrow account. With the harsh reality of Alpha Bay supposedly never returning, many dark markets, such as HANSA, are now experiencing an influx of users that are now dubbed “Alpha Bay refugees.”

However, the rumours haven’t stopped, and some users on Reddit aren’t buying the story about the international authorities stepping in. Instead, they are speculating on possible contingencies… 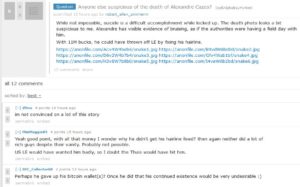 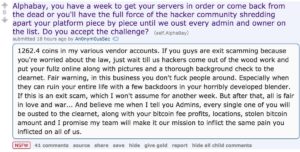 Until official representatives of U.S., Canada, or Thailand’s authorities make an official statement, all we have are rumours, theories, and angry users who have lost their bitcoins. The timing of this potential exit couldn’t be at a worse time, as the cryptocurrency community is full of uncertainty regarding Bitcoin’s SegWit activation on August 1st.

If this is a carefully thought out exit plan, the reputation of Bitcoin could be set back years. Many are already comparing this to the shutdown of Silk Road.

We will keep you updated on any further news on this as it develops in the coming weeks!