Are We in an Altcoin Bubble? If So, When Will it Burst?

Are We in an Altcoin Bubble? If So, When Will it Burst?

The Mega Pumps and Dumps!

Since the start of the year, the cryptocurrency market has been in overdrive. Altcoins have had huge growth, with sharp and sudden increases in price and volume, and fortunes have been made and lost during these last few months as coins such as Dash, Ethereum, and even Ripple, amongst many others, have been reaching new highs! 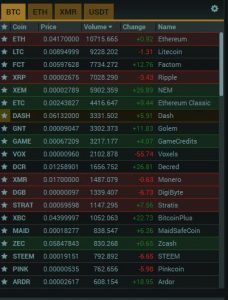 It has led many to believe we are now in an altcoin bubble. With many coins pushing to exploit Bitcoin’s scaling weakness, the overall dominance of Bitcoin has weakened from 85% down towards 70%. Despite this, Bitcoin has managed to remain bullish and sits around the $1,200 region.

Many sceptics say that the altcoin bubble is simply a way for people to easily grow their Bitcoin balances by pumping and then dumping profits back into Bitcoin, while others say it’s down to innovation in the space starting to catch up with Bitcoin, or even a hedge against Bitcoin’s hard fork possibility.

This image taken from Poloniex shows coins such as NEM, BitcoinPlus and Decred above 20% in the last 24 hours, a tame day in comparison to what the markets have been like in the last two months!

So far, altcoin pumps start either from well received news and updates regarding the respective coin or from a “whale” (someone with large amounts of Bitcoin) buying huge quantities of the altcoin, creating a domino effect as other traders see huge buy orders and start buying as well. As more capital is invested into the respective coin, the price begins to rally (usually!).

Price Dump, Bull Trap, and Who Benefits From These Surges…

The dump comes next. As pumpers have reached their target price, they simply sell back into Bitcoin with a profit, and the altcoin price violently pulls back with little to no warning. It’s well-known how easily beginners and traders as a whole enter a pump late, end up in a bull trap, and lose large amounts of their investment.

In reality, with every pump and dump in the market, there are winners and losers. The winners are those who know when to quit and pull out, while the losers are usually the ones who invest at the top of a price spike and become victims of the bull trap.

Exchanges profit from the coin rallies in transaction fees. Some exchanges, such as Poloniex and Coinbase, have crashed under the weight of volume and transactions!

Every month, new altcoins are created with new innovative features. This could also add to the bubble, with many investors trying to diversify their crypto portfolio, as some coins offer a better store of value and others offer better governance or the ability to build upon their own network.

With Bitcoin having problems scaling, the altcoins are offering attractive and savvy alternatives, faster transaction speeds, more privacy, and a cheaper consumer price to buy at.

On a passive level, users prefer buying something as a whole. With Bitcoin, this has become more difficult as its price has surged, but with cheaper altcoins, it’s considerably easier to buy as whole coins. Hopeful investors don’t want to miss the next chance of a digital currency accomplishing what Bitcoin has already managed, said to have a fear of missing out (FOMO).

This could be a large factor to the altcoins’ overall market cap growing so rapidly.

This altcoin bubble will likely correct at some point, as a sharp increase will usually lead to a sharp decrease. Looking from a long-term perspective is probably the safest option.

By focusing on long-term, slow growth, stability will be created, as opposed to sharp increases and decreases, where the volatility creates too much risk. The altcoins, although brilliant, are vulnerable to heavy price manipulation from pumps and dumps on exchanges. As fears of Bitcoin hard forking start to disappear, the altcoins may not be needed as a hedge, leading to a correction with only the largest remaining (e.g. Dash, Ethereum, Monero, Litecoin…).

Remember that only a small number of the total cryptocurrencies have any real potential usage in the mainstream markets and should be purchased only when the risks are fully understood!