Is “Altcoin Season” Upon Us, or is This Another Dead Cat Bouncing?

Is “Altcoin Season” Upon Us, or is This Another Dead Cat Bouncing?

2018 has been a miserable year for anyone who bought cryptocurrencies during the eleventh hour of the great bull run in late 2017, however, many “experts” now claim that the Bitcoin and overall cryptocurrency markets have bottomed out and are on the road to recovery, with some estimating a $700,000 Bitcoin price in the future!

According to stats on popular website CoinMarketCap, the combined market cap currently sits in the $400 billion threshold again. After hitting lows of $250 billion at the start of April 2018, the influx of capital pushed Bitcoin back above $9,000.

Bitcoin’s price increase has been humble. Altcoins across the market have shown signs of recovery, with EOS, Bitcoin Cash, and Cardano being the big winners amongst the top ten cryptocurrencies percentage-wise, with price rallies ranging from 50-100% or more. 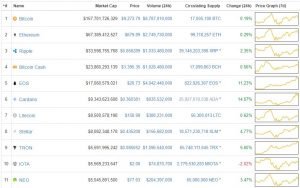 “Altcoin Season” is a term many traders and investors in the crypto community use to describe an uptrend in price and market dominance amongst altcoins.

However, this does not always mean Bitcoin goes down in price or in market cap. Altcoins are still victim to Bitcoin’s price movements and need more liquidity to become fully independent from it. As the digital reserve for the time being, Bitcoin remains the primary gateway for purchasing other cryptocurrencies.

The lack of liquidity in altcoins gives Bitcoin an advantage. Expensive altcoins can often lead to a higher Bitcoin price once users begin to sell and take profit back into BTC and native fiat currencies.

All this makes it harder for altcoins to surpass Bitcoin in market cap, but also harder to perform against Bitcoin’s price. 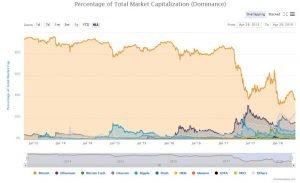 The altcoins usually perform stronger against fiat currencies and precious metals during an uptrend, similar to what was witnessed in spring/summer of 2017, where Bitcoin’s share of the total market cap dropped as that of alternative cryptocurrencies began to expand.

Cryptocurrencies such as NANO, EOS, DASH, Ripple, and more produced returns ranging from 1,000% to 10,000% and more at the height of their respective uptrends!

Data on CoinMarketCap illustrates a further downtrend in Bitcoin’s dominance, despite its price and ecosystem continuing to grow and recover.

The altcoin uptrend is a symptom of each blockchain growing independently. Whether speculation or based on real adoption, Bitcoin may not be the only winner in this industry, and that can only be a positive step forward for adoption and scalable use cases as a whole.

The upcoming weeks will reveal if altcoins are due for another explosive breakout similar to mid- and late 2017. The markets are still heavily down when compared to all-time highs, and the possibility of a bear market is still a likely outcome.

Disclaimer: This is not investment advice. Only invest what you can afford to lose, and always conduct research before investing in cryptocurrencies.