Over the recent weeks, as the build-up to the cancelled SegWit2x hard fork grew nearer, Bitcoin Cash (BCH) rallied in price. From a bottom of around $300, a spectacular weekend conclusion led to a high of over $2,400. At one point, it reached 0.5 BTC and briefly became the number two blockchain, pushing Ethereum to third!

Bitcoin’s hash power crashed by 50%, as Bitcoin Cash became the more profitable chain to mine due to the difficulty at the time. Combined with an incredibly high price, miners made impressive amounts of profit!

The damage to Bitcoin was by no means permanent, as hash power, for the time being, has returned to Bitcoin. But the bitter taste and the effects of delayed transactions on the network will not be forgotten so easily. 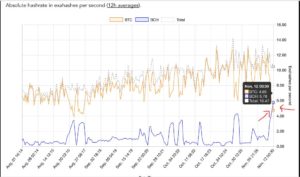 Hash rate is a term used to describe and measure the speed of the machines working on solving complex algorithms that generate bitcoins. The more hashes a device can generate, the more likely the miner is to get the reward – in this case, Bitcoin or Bitcoin Cash.

Altcoins Caught in the Crossfire! Are They Recovering From the Battle?

With the cancellation of SegWit2x, many users presumed the altcoins would finally return to the former glory they experienced in early 2017. This was interrupted by the rise of Bitcoin Cash. While some looked to Bitcoin Cash as a hedge against Bitcoin not increasing its block size, many who supported SegWit2x settled for supporting Bitcoin Cash instead!

It literally dominated in terms of network power for a while, and the trading volume surpassed every other altcoin, including Ethereum!

As a result, altcoins were again left to fester at the expense of Bitcoin hard forks. While some performed well, the overall look was stagnant for nearly everyone’s favourite alternative coins.

Markets in any sector are influenced by greed and fear. With the rally of Bitcoin Cash and the price drop of Bitcoin, many feared missing out on the easy gains offered and reacted by selling their altcoins to ride the price rally.

What goes up must come down. Bitcoin Cash plummeted once it reached 0.5 BTC, when South Korean exchange Bithumb buckled under the pressure of $4 billion worth of trading volume.

At the time of writing, the altcoins are having a mostly positive day, with the total market cap now at $216 billion! 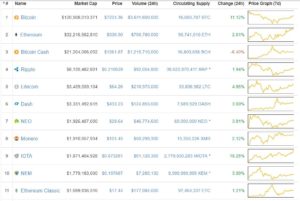 What Happens Next? Is Bitcoin Cash Here to Stay?

As a supporter of the free market and innovation, it would be an amazing step forward to see all protocols grow over the long-term. Bitcoin Cash has the capital, community, and network power to stay. Could it rival Bitcoin? Time will tell, and the markets will eventually decide.

One thing to note with Bitcoin Cash’s recent price rally is that its trading volume was rather isolated, mainly coming from South Korea. There is nothing wrong with this, but the possibility of price manipulation must be considered, even with a decentralized ecosystem such as this.