Bitcoin Rallying Within Weeks of the Dreaded SegWit2x Hard Fork!

Antifragile and stronger than ever, people still want Bitcoin, despite the latest round of drama and controversy in the past month!

Seeing Bitcoin reach new price highs is another day in the office for the crypto community. As Bitcoin currently trades above $5,200, many are now estimating a potential touch of $6,000. This rally comes at the most unlikely time, as Bitcoin faces a critical and extremely unpredictable event in the coming weeks.

Two hard forks, Bitcoin Gold and SegWit2x, are due to happen later in October 2017, and the following month, anyone holding Bitcoin will get a balance of the new forked coins at a ratio of 1:1 as the blockchains are split off from Bitcoin’s original blockchain.

It sounds great, and many celebrated and cheered about “free money” with Bitcoin Cash, which forked from Bitcoin in August 2017. The entire fiasco was hyped up to be a Bitcoin killing event, when in reality, it was nothing of the sort. It triggered a price rally in Bitcoin as users bought more Bitcoin to get “free” Bitcoin Cash.

Many say the same behaviour pattern is happening again in anticipation of the Bitcoin Gold and SegWit2x hard forks, but there are some differences that users must be aware of…

It’s always great to have an extra balance of cryptocurrencies, but is it worth losing your Bitcoin over? When Bitcoin Cash was created, it had something called “replay protection,” making it safe to use immediately. The risk with the upcoming hard forks is that replay attacks can occur.

Simply put, a replay attack occurs if a user sends Bitcoin Gold or SegWit2x from one address to another, as it could also affect your funds on the Bitcoin blockchain as well, ultimately meaning you could lose your Bitcoin by moving your newly forked coins.

With replay protection, this cannot happen, and this is why Bitcoin Cash was such a smooth hard fork. Despite some suggestions, there is an underlying fear of the upcoming hard forks, and exchanges are unwilling to list coins without replay protection for the reason stated above. It could become a disaster for users and third-party exchanges alike.

The SegWit2x hard fork is the one everyone has been dreading and trying to avoid. It would be safe to say Bitcoin would have reached $5,000+ much sooner if there were no more controversial hard forks looming over the Bitcoin ecosystem.

In the recent weeks, JP Morgan CEO Jamie Dimon labelled Bitcoin a fraud, triggering a further price crash on top of China’s new regulatory stance. The price plummeted and bottomed out at the $3,000 region, giving investors an excellent buy window.

After facing backlash from many, Dimon has now said he will not talk about Bitcoin anymore, something the Bitcoin community found quite humorous, especially after the bounce back to $4,000 and now the push past $5,000. 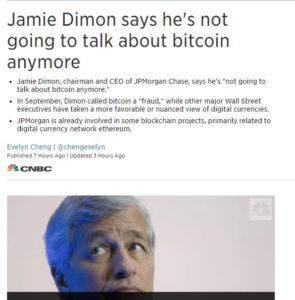