Bill Gates: The Robots That Take Your Job Should Pay Taxes

Bill Gates: The Robots That Take Your Job Should Pay Taxes

If robots take peoples’ jobs, should they pay “robot taxes” to compensate for job losses?

We have all seen the movies where robots gain the ability to think for themselves, surpass their human overlords, and inevitably take over the world. There’s hits like James Cameron’s Terminator, Spielberg’s A.I., and I Robot, starring Will Smith, to name a few.

However, outside of Hollywood, robotics is big business and a booming industry, similar to the reaction of the PC in the eighties.

Businesses worldwide are constantly looking for ways to become more efficient and create a larger profit margin, using innovation and automation to meet industry demands. One clear example of this is the automotive industry. The process of building the newest car involves very little effort from humans, as machines are in place, effectively making the factory worker obsolete.

All that is needed is a handful of people to oversee the machines, making sure there are no accidents.

Automation took the demand for workers away!

Those who can afford the endless lines of advanced robotics can expect to enjoy automated production, creating a faster rollout of stock, enabling businesses to scale and grow faster and more cost-effectively. Financially, businesses enjoy huge savings, as more machines equate to less wages to be paid to employees as the need for workers slowly fades throughout the decades. 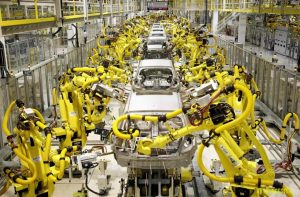 According to Bill Gates, there will eventually be a tax on robots!

In an interview with Quartz, Gates explains why there will inevitably be a “robot tax” on machines doing the work that human workers used to do.

“Right now, the human worker who does, say, $50,000 worth of work in a factory, that income is taxed and you get income tax, social security tax, all those things. If a robot comes in to do the same thing, you’d think that we’d tax the robot at a similar level.”

The former CEO of Microsoft believes that as more industries choose automation over employing and paying workers, the tax that workers would normally pay would eventually be placed upon the robots as a “robot tax,” as Gates described it.

This isn’t a farfetched insight. At the moment, corporations are saving large sums annually by using automotive machines to do the hard work. In turn, this creates a gap where no one is being taxed for the extra profit made. Gates believes this would compensate for the loss of jobs in numerous industries.

Gates also explains that robotics companies wouldn’t mind the new robot tax. As specialists in this field, they would have anticipated the new laws coming into place, as tax and social security payments from wages would dramatically drop as more people are replaced by efficient and cost-effective robots.

Gates reassures viewers that robotic companies will be fine with a robot tax!

People have given a mixed response to Gates’ suggestion, with many on Twitter stating that if robots get taxed for efficiency, then Microsoft should be taxed for the software that enables more efficiency when doing tasks! 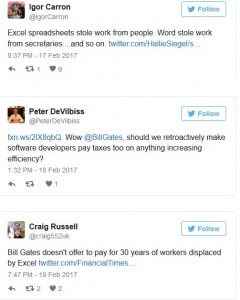 Robotics is now replacing jobs at an alarming rate. With innovation and advancements in technology moving faster than ever before, workers are being squeezed out with skills that are virtually obsolete.

Automated engineering is a valued industry to be trained in. As more start-ups emerge that specialize in robotics and further advancements in automation come as a result, we may start seeing more supermarkets with automatic checkouts, more industrial jobs using machines as a means of paying out less on wages, and more automation and efficiency being used through the Internet in the very near future.

Regardless of whether people agree or disagree with Gates, innovation and progress cannot be stopped!

To see the video of Gates talking about robot tax, click here!