It’s been another action-filled week for Bitcoin and the altcoins. SegWit on Bitcoin has locked in and will be expected to activate this month. In reaction to this, the Bitcoin price has rallied through $3,000 and overcome $4,000!

Many are now wondering if Bitcoin can reach the much anticipated $5,000 smoothly or if any sudden corrections will occur!

Certain altcoins/tokens such as NEO, IOTA, and Civic have made a big impact on the markets as well, showing impressive price rallies of up to 100%, with Litecoin holding strong and Ethereum maintaining its price near the $300 area.

This week hasn’t just been Bitcoin’s week. NEO, which is dubbed “The Chinese Ethereum,” has more than doubled in value, most likely due to the Japanese tour that is currently ongoing and the fact it uses smart contracts (like Ethereum) to enable building upon its blockchain. 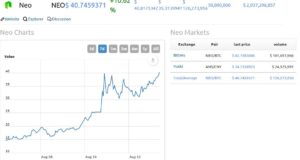 NEO also uses a much more easy to use programming language and is compatible with many different languages, such as Python and C++. The recent rebrand from Antshares seems to have worked well for NEO, and rumours are circulating that the Chinese government has a “friendly stance” on this blockchain.

Another incentive for investors to hold is the GAS token, which is the secondary token in the NEO ecosystem after the NEO token itself. GAS is what governs the value of a transaction, similar to how Ethereum works.

Holders of NEO who are using the private wallet automatically get a GAS balance added. For each NEO held, users get a small amount of GAS, which continuously increases as more blocks are generated on the blockchain and as the holder possesses more NEO.

GAS currently trades at around $16 and is up 25% at the time of writing and can be traded on Yobtc and Binance, although in some cases you may need to send NEO to the exchange to get GAS.

This is highly volatile and should be properly researched before considering a purchase.

What Next for Cryptocurrencies?

We could see a correction if Bitcoin reaches $4,500-$5,000, as those prices represent a benchmark and a good time to take profit. Despite this, the market seems bullish for the time being, and other blockchains (such as Ethereum, IOTA, and Litecoin) seem to be performing well.

The next step for Bitcoin is the Lightning Network, which is nearing completion. This will enable micro-transactions in off-chain applications for users and bridge Bitcoin and Litecoin together.

The rest of 2017 and 2018 looks incredibly exciting and positive!