Yet Another Bitcoin All-Time High, Nearing $1,500 – Altcoins Take a Hammering!

Yet Another Bitcoin All-Time High, Nearing $1,500 – Altcoins Take a Hammering!

It seems to be a regular topic, but Bitcoin has again reached an all-time high as it closes in on the milestone of $1,500.

Within the last 24 hours of writing, Bitcoin reached the $1,450 area, an achievement many could only dream of 12 months ago when Bitcoin was roughly $1,000 cheaper to purchase.

This extremely bullish run is inspiring speculators, investors, traders, and many more to dare to dream of a $2,000 Bitcoin — and even beyond — but as Bitcoin flexes its muscles, the altcoins are down in price overall as people dump their alternative coins to ride the Bitcoin bull wave!

Altcoins Are Taking a Hammering

It seems as if the alternative coins aren’t showing up to work today, as nearly every coin is down due to Bitcoin surging. This is usually a result of capital flooding back into the number one coin. As FOMO grips the markets, people don’t want to miss the latest train to gain easy profits.

This isn’t necessarily a bad thing. By selling Bitcoin at a high price, many will see this as a golden opportunity to buy cheap coins and wait for the inevitable altcoin rebound. This happens when users take profit and diversify into cheaper endeavours that have the likelihood of being the next pump.

Selling strong Bitcoin for cheap altcoins is a profitable practice in the markets, after which the opposite is then applied and the cycle continues. 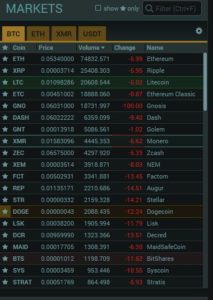 The image shows a snapshot of altcoins listed on Poloniex, all down due to the latest Bitcoin surge.

Why is Bitcoin Rallying?

There are always numerous reasons behind Bitcoin’s new all-time high. Rumours of the ETF decision being reconsidered have made people bullish, as the ETF hype months ago encouraged Bitcoin to reach its previous high of around $1,300.

Japan, India, and Russia are opening up or already have opened up to legal Bitcoin payment options and usage, while reassurance of Bitcoin not hard forking has added confidence in investors as Litecoin is currently in the process of activating SegWit and the Lightning Network, pushing the fear mongering of Bitcoin Unlimited to the side.

Another key indicator could be profit from the recent surges, with altcoins being diverted into Bitcoin. Although the opposite happening is usually the more likely scenario, it is well known that when Bitcoin does well, Altcoins don’t, and vice versa.

Overall, despite the congested network and high fees, Bitcoin is still bullish, with no signs of stopping or slowing down, and with bullish investors and positive developments happening within its ecosystem.

This is the question on everybody’s minds. It’s a bullish thought, but this could become reality if we continue to see Bitcoin behave in a similar trend to what it has been doing for the past 18 months. As fears of hard forking become a distant blip in the long-term journey of Bitcoin and several developed nations start to adopt Bitcoin, this could be the beginning of a much more violent upward trend.

Since the beginning of 2017, altcoins have increased in price and market value and have shown higher gains than Bitcoin itself. Bitcoin is the center point of a strong ecosystem and growing awareness.

Resistance and psychological barriers being broken at $1,500 and $1,700 could create huge hype, and may even create a bubble if it surges too quick. We could see history be made and a new wave of wealth being generated if Bitcoin continues to outperform itself and most currencies on Earth!