Down But Not Out?

With many breathing a sigh of relief in the aftermath of the Bitcoin hard fork, many have assumed Bitcoin Cash (BCH) would be dumped and forgotten about like so many other altcoins…

In the last 24 hours, Bitcoin Cash has surged above $600, and at the time of writing, it is around $650, with a market cap of over $10 billion! This is giving BCH miners a boost in profits after the price slumped to $200 due to many users dumping their “free” Bitcoin Cash.

There’s more good news for the Bitcoin Cash supporters, as an 8MB block was mined successfully. Despite it being a spam attack, unconfirmed transactions in the memory pool spiked within a few hours from the hundreds to above 80,000!

As the chart below illustrates, the sudden high volume was promptly worked through on two occasions. 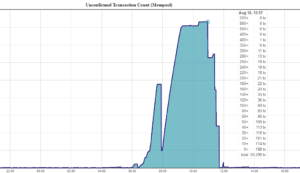 You can find more stats and information regarding the 8MB block here and here.

Also happening over the weekend, the mining difficulty is set to drop by up to 50% once a specific block is reached, enabling greater rewards from mining and making Bitcoin Cash a more profitable chain to mine than Bitcoin (BTC).

Bitcoin’s Momentum Slowed Down After Flippening With PayPal!

After reaching greater highs, Bitcoin (BTC) has dipped below $4,200 and sits around the $4,100 region. Regardless, Bitcoin’s market cap remains above $67 billion and a slight dip could be healthy after its recent price rally.

At one point this week, Bitcoin surpassed PayPal’s $70.2 billion cap, a huge achievement for the community and blockchain overall.

Both BTC and BCH have had an eventful and productive month. With the slight differences each chain have, we could see some very interesting developments as we reach the end of summer. With SegWit activating and big blocks competing, the last months of 2017 could prove to be the most exciting yet…