Is Bitcoin Cash (BCH) Worth Holding?

While the soft fork for Bitcoin’s BIP91 went through without any issues, on August 1st, Bitcoin went through a hard fork as well, bringing about a new currency, Bitcoin Cash (BCH). Since its release, it’s had a turbulent time, but what can be expected in the future for the new split?

Bitcoin Cash is based on a clone of the normal Bitcoin’s blockchain as of August 1st. As a result, anyone who had Bitcoin in their possession (where they held the private key or where the party that did was sharing the coins) was given an equal amount of BCH as well. Due to this being looked at as “free money” by a lot of people, the goal for many was to dump it as soon as possible and take what they could get, funneling the money back into Bitcoin itself. As a result, there was a very clear pattern created where each new block mined on the BCH chain led to the coin’s price dumping more and more. It went from a high of around 0.7 BTC each to (as of this writing) 0.06 BTC, a fairly heavy drop. But this was to be expected.

Why Was BCH Created?

If people were going to dump, what was the point of even creating the coin? Some claim it’s a money grab by ViaBTC, but when it comes down to it, it’s taking a different approach to the scaling issue. Rather than relying on SegWit, it increases the block size itself as the potential solution for the massive backlog in transactions. And so far, it has proven to be much more successful than the Bitcoin blockchain in handling this, as shown in the following image: 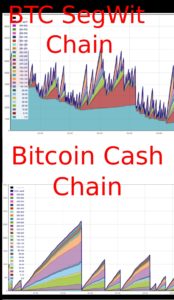 It does, however, come at the cost of inflating the blockchain, but the fact is that it’s showing that the backlog in Bitcoin could be cut down by increasing the block size, even without any other changes.

As of yet, BCH is continuing its downhill ride. Its hash rate is only a fraction of that of Bitcoin’s, and its price has continued to plummet. ViaBTC has stated that should it not be considered as a success by August 15th, they will discontinue the chain and move back to BTC. With that said, it is largely a speculative currency at this point. If they are able to prove that it is better than Bitcoin, it could easily do a turnaround, as all infrastructure for BTC can already support BCH out of the box. But the chances of this happening at this point are slim. As a result, many are calling on the fact that Bitcoin didn’t grow to where it did in a matter of days, and BCH shouldn’t be expected to, either.

When it comes to investing, the simple fact is that the coin’s chain could end in a little over a week. If that happens, anyone holding the coins will have zero value, as the main supporter (ViaBTC) will already be out. However, if it does happen to make it past that time, it could grow over time. In the meantime, there is no telling how much lower the coin is going to go in value – there are still dumpers, but the important thing to remember is that for every seller, there is also a buyer. The fact that it has not already gone to zero (and is still at around $200 as of this writing) is proof that it does still have support. It’s just a question of how much support it is going to hold and gain going into the future.