Bitcoin Cash Hash War Continues as Billions are Wiped Off the Markets!

The War is Going Great!

Last week we reported on tensions reaching critical levels within the Bitcoin Cash community regarding the controversial hard fork that successfully took place and split the BCH network in two over the 15th of November.

In the hours before the split, opposing leader Craig Wright, of Bitcoin Cash SV (Satoshi’s Vision) and nChain, came out with a flurry of hard-hitting statements regarding not just the future of BCH, but BTC itself as well! 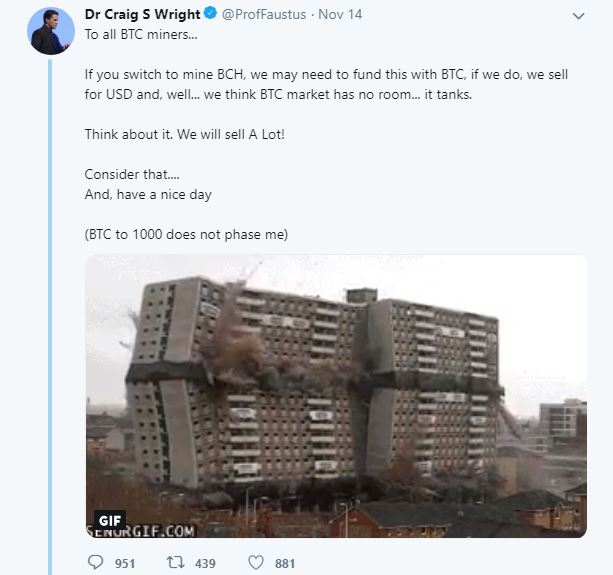 Craig Wright claims to be the creator of Bitcoin, Satoshi Nakamoto (no proof of this has been given at the time of writing). In this blunt tweet, he mentions selling BTC reserves to fund the “war” against Bitcoin Cash ABC and ultimately crash the price of BTC to 2014 levels. Will he pull the trigger? 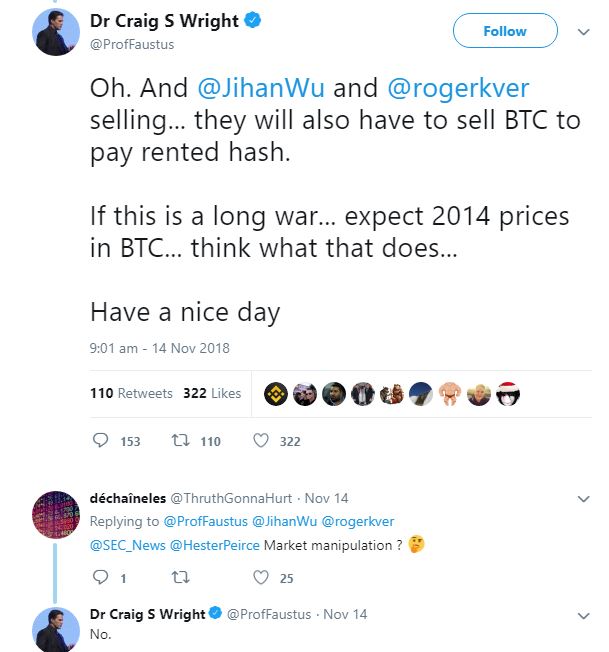 It doesn’t end there; he also hints at a critical software bug in the code of BTC and any other cryptocurrency with SegWit implemented. According to Craig, Bitcoin is a “dead man walking” and all information on the flaw will be revealed in 2019.

Again, will he do it? 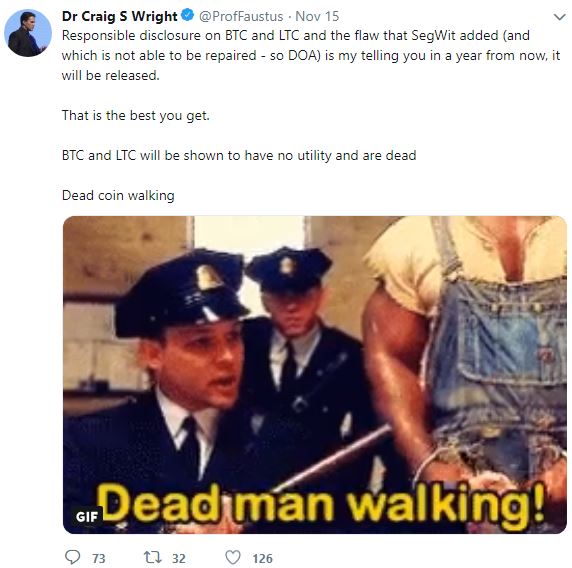 Who is Winning the Hash War?

At the moment, it’s too early to declare a winner. Bitcoin Cash ABC has the longer chain for now according to cash.coin.dance, but the more accurate question is who can maintain the highest levels of hashing power for the longest.

According to popular statistic Websites coinwarz and coin.dance, Bitcoin Cash ABC has the highest amount of hourly hashing power so far, though Bitcoin Cash SV has begun to take back some ground.

Also worth noting, BTC’s hashing power hasn’t been too heavily affected by the hash war, although BCH’s total hash rate has exploded as anticipated.

There are rumors of Bitcoin Cash SV conducting shadow mining. This is when miners do not publish or broadcast the mined blocks to the network, usually to hide hashing power and reorganize the respective blockchain once enough blocks are “selfishly” mined.

Meanwhile, in Other Cryptocurrencies…

Whether the result of typical market cycles or the fear from Craig’s brutal tweets, the cryptocurrency markets experienced a massive sell-off just before the BCH split.

Bitcoin broke the floor and now trades at yearly lows around the $5,500 region, with Ethereum losing its number two spot to XRP yet again.

The bloodshed may not be over for a few more years. According to long-term data, Bitcoin’s floor could be anywhere between $5,000 to the mid-$3,000 range!

One of the stronger performers in the recent weeks has been the controversial XRP token, however, the underlying fundamentals of blockchain tech and cryptocurrency are stronger than ever. The ongoing hash war within BCH’s community will likely provide many lessons for the crypto sector.

We will keep you up to date on the latest events in the BCH hash war!

Bitcoin Cash Hash War Continues As Billions Are Wiped Off The Markets! 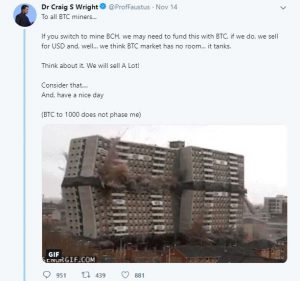 Bitcoin Cash Hash War Continues as Billions are Wiped Off the Markets!