Bitcoin and Gold Don’t Need to be Adversaries!

Bitcoin and Gold Don’t Need to be Adversaries!

The Gap Between Bitcoin Enthusiasts and Gold Bugs!

Both gold and Bitcoin have advantages and disadvantages. It is well-known that there is a passionate divide between Bitcoin enthusiasts and metal-holding gold bugs! The idea of wealth being something digital and electronic is something many are still coming to grips with, while Bitcoin and cryptocurrency enthusiasts seek high and fast returns, rather than the stifled and slower moves that gold and silver make.

Although precious metals are more of a wealth preserver, disgruntled gold and silver holders are long overdue a bull run in precious metals, yet at the same time, they are witnessing the explosion in blockchain tech and cryptocurrency, with the average investor taking profits anywhere from 10% to 100% on any typical day.

With that being said, having financially disruptive technology and physical metals as part of your portfolio may offer some interesting diversity. Let’s look at some of the interesting differences that make Bitcoin and gold a powerful combination.

Gold’s weaknesses are complemented by Bitcoin’s strengths and vice versa, highlighting Bitcoin and gold becoming effective hedges against one another. Rather than taking sides, the logical choice of action could be to embrace them both…

People are Fed Up With the Suppression of Precious Metals

It’s no secret that the gold and silver markets are being suppressed. Silver is heavily undervalued, and any price movement is quickly strangled and suppressed. Cryptocurrencies have given people who want to preserve their wealth (and even compound it) a lifeline.

The question still remains: how long can the central banks keep the floodgates closed? The eventual collapse or reset of the fiat monetary system is going to happen (we only have to look at history), triggering many to flock to precious metals in droves, overwhelming the current market and pushing the demand sky-high.

You can read about Bloomberg admitting gold is suppressed here!

In a previous article, I compared gold’s market behaviour to Bitcoin’s. Some similarities were discovered, but there was one underlying variable to acknowledge.

Bitcoin moves much faster than gold. What gold achieves in a decade, Bitcoin achieves in a year. This could be down to manipulation of the precious metal holding back the price, but as Bitcoin and cryptocurrencies continue to grow and slowly enter the mainstream spotlight, we could see Bitcoin enter cycles lasting weeks or months, rather than years.

The two images below show gold’s bullish trend after the Nixon shock and Bitcoin hitting its previous all-time high back in late 2013 and early 2014. 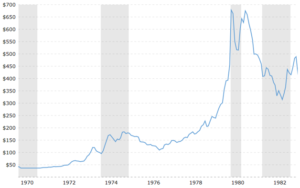 The final two images below show similarities in a bear market. 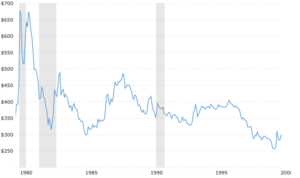 Charts from Coindesk and MacroTrends.

Of course, the price patterns and behaviour of gold and Bitcoin are all governed by human actions and how we perceive these two assets.

To read the full article on Bitcoin and gold moving in similar patterns, click here!

What Will Push Gold Bugs to Cryptocurrencies?

As the blockchain industry grows, institutional money will begin to enter. With this happening, we could see the older generations of investors begin entering cryptocurrency. Combined with the lack of performance by precious metals, many sitting on the sidelines may have no choice but to embrace this new financial revolution.

With every passing month, more and more people are seeking to add cryptocurrency to their portfolio and as a backup plan for retirement. For similar reasons as to what we have just highlighted previously, the most likely scenario, which is well underway, is that gold bugs will embrace Bitcoin first, seeking stability, security, and long-term potential before looking into the much smaller and more volatile altcoins (alternative coins).

Simply put, they will seek something that resembles gold the most. At the moment, it’s Bitcoin. Despite the rift between gold and Bitcoin communities, the gap is narrowing. Popular gold bugs, such as Andy Hoffman, are extremely bullish on Bitcoin.

However, the most important factors to bring gold bugs to Bitcoin are trust, research, and a stable ecosystem surrounding the technology and an understanding of what it truly brings to the table.

It’s an interesting topic. USD Tether is supposedly a dollar-backed cryptocurrency/token used to represent the dollar’s price. It is used on popular exchanges, such as Poloniex, but in recent months, there has been some controversy around this, as the trade price hasn’t always been pegged to a dollar.

When it comes to something like gold, such things cannot happen. One use case could be creating a decentralized blockchain to record, authorize, and send its digital value using a token/cryptocurrency that is backed by physical gold.

Such a topic deserves its own article, but the potential is there. However, for such a thing to happen, gold must be free from manipulation and the respective blockchain itself must be decentralized, like Bitcoin or Litecoin.

A centralized blockchain or a distributed ledger, like Ripple (XRP), could be prone to manipulation or pre-mines (where 50% or more of the supply is locked by one central authority or company), which would not solve any problems at all.

At the end of the day, you must make your own decision. This is not investment advice; this article is merely to share insights and provoke thought.

There is an element of risk with any asset or technology, and especially if you choose to invest in them, doing your own research is recommended.