What a week it’s been in the cryptocurrency Markets. If August 2017 was one of the greatest months in Bitcoin’s existence so far, then it certainly looks like September 2017 will be just as eventful! 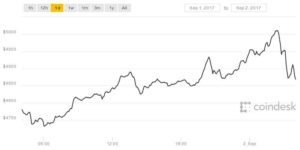 Within the last few days of writing, Bitcoin touched $5,000 and Litecoin reached an impressive $90. Since then, a healthy dip has occurred with both of the cryptocurrencies, which was of no surprise to traders, as both coins reached huge milestones.

Many, including myself, have always pointed out Litecoin’s potential as a great investment, even before its rejuvenation through SegWit, when it traded around the $3.00-$4.00 region.

Litecoin has had an amazing year. Despite the political drama with SegWit, the activation of this new scaling solution has given life to the coin, making it a serious contender amongst other cryptocurrencies.

Many deem Litecoin as the test net for Bitcoin due to it activating new solutions such as SegWit and off-chain applications first. However, this gives Litecoin a first-mover advantage over the number one Bitcoin.

With Bitcoin hard fork fears from SegWit2x and scaling debates still ongoing, Litecoin is seen as a great hedge and plan B against Bitcoin.

You can see Charlie Lee, the creator of Litecoin, interviewed at Crush The Street here!

It’s not just Bitcoin and Litecoin that are making history – the majority of the altcoins are growing, as well as the total market cap. Despite several corrections over the course of the last 12 months, the entire industry has grown multiple times over, with Bitcoin and Ethereum having a combined market cap of $100 billion alone!

However, the industry is still relatively small for corporate investment, which shows the potential we could see come to reality. The last 12 months have shown the industry grow by 4x what it was in 2016!

At this rate, $200 billion could be reached by the end of the year, but there is one dark cloud looming over the cryptocurrency industry: the second Bitcoin hard fork, scheduled for November…

This new coin would be Bitcoin with SegWit, but a 2MB block size, dubbed the SegWit2x coin. The fear of the last hard fork caused Bitcoin to plummet to $1,800-$1,900, and we may see history repeat this, just like how it happened in July and early August!

The image below shows the effect the fears of the hard fork had on the total market cap back in late June 2017 to early August 2017. Looking back now, it seems like a good buying opportunity for the long-term thinkers. 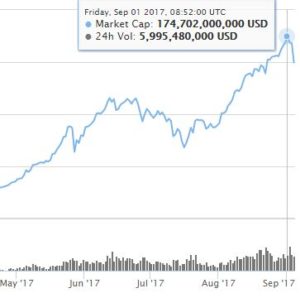 2017 is far from over, and a lot can happen in this industry. With South Korea making itself a major cryptocurrency player in Asia and the slow but steady embracement to the technology from Russia, we could very easily see more capital flow into the space in the next few years.

2018 looks even more promising if we stay on the current trajectory!