In the aftermath of the BCH hash war, the cryptocurrency markets continue to plummet, with billions of dollars’ worth of capital leaving the markets.

Bitcoin has now hit 13-month lows, dipping under the mental barrier of $5,000 and currently trading at $4,990 (again) at the time of writing. With most of the top ten also pulling back considerably, stablecoins seem to be the only safe havens in this latest downturn.

Amongst the misery, equally loved and hated cryptocurrency XRP is the best-performing digital asset so far, with losses of only 4-5%. Because of its resistance to the market sell-off, XRP has regained and strengthened its number two position over Ethereum, which is down over ten percent at the time of writing.

The two cryptocurrencies have been battling for the number two spot for the most part of Q4 2018. Another rival to XRP is Stellar Lumens (XLM), which currently stands at number five, also down 10% today.

We end on some good news. After waiting years for a digital asset-based ETF in the U.S., one is to be listed on the SIX Swiss Exchange, the flagship stock exchange for Switzerland. 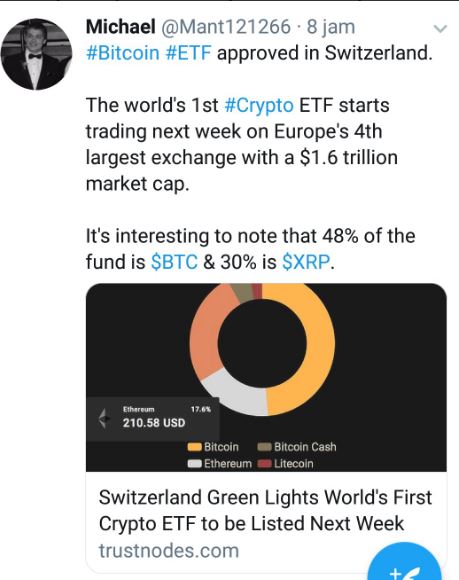 It will not just be Bitcoin; the exchange-traded fund consists of other popular cryptocurrencies, including ETH, XRP, BCH, and LTC. The fund is mostly made up of BTC, which accounts for half, XRP at around 25%, and ETH at 16% according to online news outlets.

SIX Swiss Exchange is one of the largest stock exchanges in Europe, and it now sets a shining example for the world to follow in the adoption process of digital assets in the financial sector.

While the SEC delays and ponders on a decision, other countries are beginning to take charge, something that could stunt the growth of not just cryptocurrencies, but blockchain tech’s growth in the U.S.A.