In another twist to the scaling debate, almost 70% of Bitcoin Unlimited nodes went offline as news of a software bug was announced.

On Tuesday, Bitcoin Unlimited nodes dropped from near 800 down to 400 following the news of an attack exploiting a software bug. The bug exposed a vulnerability in which nodes could be taken offline by a specific message.

Although the problem was quickly resolved, the incident has left a sour taste in people’s mouths regarding whether or not Bitcoin Unlimited is competent enough to maintain the entire Bitcoin network.

Fortunately, Bitcoin’s price and community aren’t affected by this attack, and it could even be a blessing in disguise for the scaling debate between Bitcoin Core and Unlimited…

Confidence in Unlimited is Lower

Litecoin’s creator, Charlie Lee, expressed his opinion regarding the attack on Twitter.

With the debate regarding how Bitcoin will scale reaching a stalemate, the community may lean towards Core for assurance in Bitcoin’s security and long-term future, as many doubt Unlimited’s technical ability.

There are also suspicions of Unlimited’s description of vulnerability not adding up mathematically. 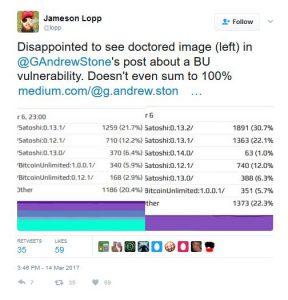 Will the Scaling Debate Continue?

Unlimited has gained momentum in the recent months, with a strong increase in node signalling and support by Roger Ver himself. Although the development team isn’t as large as Core’s, their popularity has increased, since pools such as AntPool have signalled for Unlimited.

Another considerable boost for Unlimited is Roger Ver’s own mining pool, named Bitcoin.com, which incentivizes miners to join by giving them an extra 10% in block rewards to encourage more miners to use Bitcoin Unlimited.

Will Unlimited Get Back Their Momentum?

Despite the attack on Unlimited nodes, the trajectory of Bitcoin’s future is still open for debate. Core’s SegWit still needs miners to signal for its activation, and neither side wants to compromise. Eventually, a solution will be found, but the Bitcoin community may think twice before implementing something that could potentially put Bitcoin and cryptocurrencies in general at risk.