What Happens if Bitcoin’s Dominance Continues to Fall? Do Altcoins Still Need Bitcoin?

What Happens if Bitcoin’s Dominance Continues to Fall? Do Altcoins Still Need Bitcoin?

Since its inception, Bitcoin has led the cryptocurrency industry, with the largest market cap by far. But with new investors seeking cheap altcoins, combined with innovative blockchain projects flourishing, Bitcoin has had to start sharing! 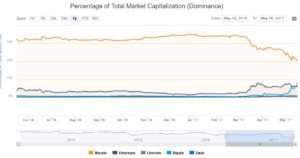 Would Being Below 50% Make Any Difference?

Bitcoin losing its market cap dominance doesn’t mean its own market cap shrinks. The entire economy of Bitcoin is healthier than ever, however, it means the overall combined market cap of every cryptocurrency is much more diverse and shared more equally.

As more altcoins begin to reach the $1 billion market cap threshold, combined with large amounts of funds accumulated from ICOs, many are now wondering if we are in a bubble and how much further this can continue before a huge correction occurs.

At the start of 2017, Bitcoin boasted an impressive 80% market capital dominance. With all-time highs coming in almost weekly, the dominance has slowly decreased over the years, with little effects on Bitcoin directly (if at all). At the time of writing, its dominance is fluctuating around the 50% region. Despite this downward momentum, Bitcoin’s price and market behaviour — which are still extremely bullish — continue to defy sceptics.

Is the Capital Flowing From Bitcoin or Other Sources?

As many users of cryptocurrencies are familiar with, to buy any digital currency, one must use Bitcoin (or sometimes Ethereum) to make the purchase. This is slowly starting to change as more users embrace other coins, which could explain why Bitcoin’s own economy isn’t shrinking as altcoins expand.

Unless investors can bypass Bitcoin and buy their desired altcoin directly with fiat, Bitcoin will always benefit from an altcoin bubble, as it’s Bitcoin that users will go through to buy and sell digital currencies on most platforms.

Do Altcoins Still Need the Digital Store of Value?

The altcoins, although expanding at an accelerated rate, still depend on Bitcoin. As Bitcoin is the primary currency used for buying speculative altcoins, they are indirectly linked to Bitcoin’s performance and demand. Many say the true market cap of Bitcoin is the entire cryptocurrency economy, which could have more truth than people care to believe.

Though slower for the time being, Bitcoin is more tested, more widely used, and it’s psychologically everyone’s crypto gold standard. On a Bitcoin surge, all others temporarily crash, whereas during the altcoin surges, Bitcoin has set new highs and experienced the warm embrace of not just Japan, but Russia, India, and Australia as well.

In a crisis, everyone runs back to Bitcoin for stability and wealth protection!