October 16th, 2017 will go down as a historic day for the Ethereum community, as the much awaited Byzantium hard fork, a group of protocol improvements, is activated successfully at block number 4,370,000.

Despite doubts that Byzantium would actually activate on schedule, the ETH trade price reflected the market’s optimism for the hard fork. Ethereum currently trades for around $338 at the time of writing.

Byzantium is the first hard fork of a major two-part process (named “Metropolis”) to enhance the Ethereum blockchain and help prepare Ethereum to eventually swap to the proof-of-stake algorithm. The second hard fork of this upgrade will be Constantinople, although at the time of writing, no official date has been given as to when this will occur. 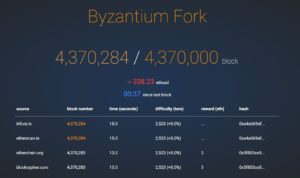 What Does Byzantium Change?

As stated earlier, the overall upgrade of Metropolis is to prepare Ethereum for proof-of-stake. Byzantium is a set of EIPs (Ethereum Improvement Protocols), some of which help enhance block creation time, transaction speed, privacy, and even alter the mining payout. Here are some of the changes we can expect from the latest hard fork.

Mining rewards changed: The mining rewards will be reduced from five ETH to three as a step to phase out mining on Ethereum as the switch over to proof-of-stake continues. To compensate for this, the frequency of blocks being created is much now higher.

Preparations for privacy and zk snarks: One of the likely reasons for why Ethereum’s price has rallied is the plan to add anonymous transactions. Ethereum seeks to use zk snarks, which is the same cryptography that Zcash uses for privacy.

Overall, the Byzantium fork has been welcomed warmly. The dynamics and politics surrounding this fork differ from a typical Bitcoin hard fork, with no minority wanting to mine the original Ethereum chain (at least at this time), keeping the community united as one. 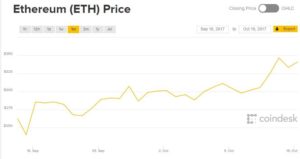 As Ethereum continues to move forward, providing technological solutions for the growing volume that is mainly from ICOs, the possibility of returning to all-time highs is more likely now, as the problems holding back Ethereum are now being tackled. Despite reducing rewards as a way of weaning users from the proof-of-work algorithm, it was a clever move to keep miners incentivized by enhancing the block creation frequency.

Excluding the DAO-influenced hard fork of June 2016, Ethereum hard forks are relatively drama-free and heralded as essential for long-term success of the Ethereum ecosystem. All eyes now shift to the next phase of Metropolis: Constantinople…