Bitcoin’s entire hashing power is ten times larger than what Google could produce!

It’s no secret that China loves Bitcoin so much that the Chinese Bitcoin miners have a huge influence over the number one cryptocurrency.

With renewable electricity in China, the cost of electricity for machines is considerably lower, making the country with the second-largest economy on planet a good choice for starting up a digital mining business.

Around half of Bitcoin’s mining power, better known as its hash rate, is generated in China, making the country centre stage for Bitcoin and other cryptocurrencies.

What is the hash rate?

Hash rate is a term used frequently in the Bitcoin universe. It is used to measure the speed of the machines working on solving complex algorithms that generate bitcoins.

This uses considerable amounts of electricity, and as it gets more difficult to generate bitcoins, more power and speed/hashes are needed.

Higher hash rates mean a better chance of the computer finding the next block and receiving the reward.

So what happens when people don’t have powerful machines?

Mining pools are the answer, preferably the bigger the better. A group of Bitcoin miners will combine their CPU’s processing power by joining the same mining pool and will solve the algorithms needed to create the blocks to generate the bitcoin reward together.

The downside is the more miners there are in the pool, the more the rewards are divided up, with the miners with the highest hashing power take the largest share!

The Chinese are dominant in digital mining! Of course, the U.S.A. has a good amount of mining pools, but nowhere near the dominance of China. To put it into perspective, the top 3 mining companies that control 50% of the entire hashing power of Bitcoin are in China. 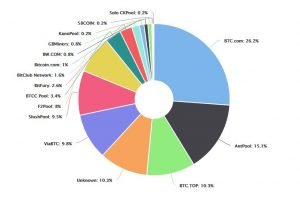 The three largest slices are Chinese, showing that they clearly have a huge impact on the price of Bitcoin.

What other variables from China affect Bitcoin?

An outside influencer would be the yuan, China’s local currency. When this loses value, many Chinese pump their savings into Bitcoin. As it’s popular, combined with their large population, the price of Bitcoin surges. The later half of 2016 really proved this.

China has some of the biggest Bitcoin exchanges. With high volume and plenty of people with Bitcoin willing to trade, some have said the price of Bitcoin has been heavily manipulated.

Heavy buying and selling helped contribute to Bitcoin’s latest surge and slight drop in the recent weeks, as the yuan made unexpected gains against the dollar in Jan 2017, encouraging many Chinese holders to cash their bitcoins back out into their local currency.

OKCoin is the biggest exchange in the world, and it is based in China. Bitfinix is also a very popular Chinese exchange.

The Chinese government has issued warnings over Bitcoin, and many presume it’s because of the amount of local money going into Bitcoin and out of the country. There are rumours of regulations on Chinese exchanges and new means of control that could either damage the price or cause it to spike.

Other alternatives that are popular in China are Litecoin and Ethereum Classic.

This may be true to a certain degree, but only if one chooses to believe the majority of hype floating around in forums and propagander hubs. While China does have a huge influence in the price and mining of Bitcoin, there are many other countries in the world mining Bitcoin and working on blockchain technology.

News in china does affect the price on a short-term basis, as we have seen since the start of 2017, which may have other Bitcoin holders worried, but it’s not that bad.

What I’m trying to say is that it’s not all about China. The only reason mining is so big in the world’s second-largest econmoy is because of the cheaper renewable energy and a huge population that happens to be quite tech-savvy.

Try and see through the hype and fake news spreading on Internet forums, and stay logical!

Currently, a wide variety of rumours from China are circulating the Internet, causing further drops in the price of Bitcoin.

The rumours vary from government intervention in exchanges to the government inquiring about people who hold Bitcoin. My advice is to not believe everything you hear, as there are many contradicting stories and hype.

I personally believe that governments (not just China’s) will want some form of stricter regulations on exchanges.

At the moment, regulation is quite low and has been described by many as the Wild West, however, this may not be a bad thing. It is beginning to show that overseeing authorities aren’t seeing Bitcoin as illegal and see it more as a currency or a commodity.

There may be light at the end of the tunnel, but only time will tell.