Chinese Government Wants to Control Bitcoin Through a Hard Fork?

Chinese Government Wants to Control Bitcoin Through a Hard Fork?

Is There a Plan to Take Control of Bitcoin? What’s Really Going on Behind the Passionate Debate?

Could there be an ulterior motive to seize control of the number one cryptocurrency, Bitcoin? There are many in the crypto space who sense there is foul play at work involving Bitcoin Unlimited!

Roger Ver (Bitcoin Jesus), the owner of Bitcoin.com and celebrity face of Bitcoin Unlimited, has faced heavy backlash by the Bitcoin community for his eagerness to fork Bitcoin, which has led to a deepening divide and uncertainty within the markets.

Many in the community would rather implement Bitcoin Core’s soft fork before even considering something like a hard fork. Unlimited has been hasty to hard fork Bitcoin without trying out the safer and more democratic soft fork, which has left many to believe others out there want to control Bitcoin, or at least control its trajectory. 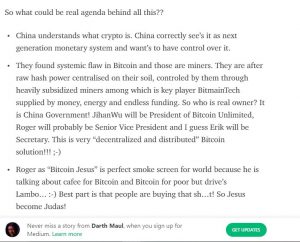 Why Rush a Hard Fork With Software Bugs?

Many are asking why Unlimited is so suddenly eager to push this fork forward. Not being able to complete day-to-day transactions could be solved without the drama through Core’s SegWit, and perhaps other methods, but rushing into a hard fork using a version of Bitcoin that has been discovered with numerous software flaws may not be the logical solution. This has added further doubt over Unlimited’s ability to run the potential flagship version of Bitcoin, leading many to question what is really going on behind the veil.

Bitcoin’s network needs to solve the transaction congestion problems. The safer and more democratic route should be considered first. Unlimited (BCU) wants to increase the block size via hard fork and is trying to build bridges with various mining pools in China to gain enough hash power to ensure a successful hard fork and defeat BTC, but are the Chinese mining pools that side with Unlimited running their own agenda with the help of outside influence?

The Chinese Government is Potentially Working With Mining Pools to Control Bitcoin Through Unlimited!

It’s no secret the government and banks of China want to control Bitcoin. As the Medium.com writer known as Darth Maul says, “China understands what crypto is. China correctly see’s[sic] it as next generation monetary system and want’s[sic] to have control over it”.

China is home to many of the largest Bitcoin mining pools, and also some of the busiest Bitcoin exchanges on the globe. With so much access to Bitcoin literally on the doorstep, China’s government can impose regulations. In theory, it can even harness the hashing power that mining pools generate much more easily. 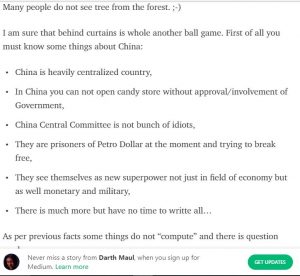 Being one of the most centralized nations on Earth, the Chinese government and PBoC do not like the prospect of a borderless system out of their control, where capital can leave the country without any regulation. China also depends heavily on the dollar and seeks to house the next world reserve currency.

With Bitcoin becoming a thorn in the authorities’ side, the ruling centralized powers may have decided that rather than taking on Bitcoin head-on, it would be more effective to join it from within…

Roger Ver has openly said he would dump his BTC if Unlimited forks off into their own chain. Roger claims to be one of the earliest Bitcoin investors, and it’s a well-known fact he owns a large amount of Bitcoin – so large that he could effectively manipulate the market price temporarily.

This could potentially be a move to weaken the BTC price and strengthen BCU’s market cap. In doing this, panic and fear would grip the markets.

With the original Bitcoin weakened, the new version could gain market capital and have a large influence in the crypto market. Mining pools influenced by government agenda would mean Bitcoin becomes centralized.

Although this is all theoretical, it is important to contemplate why there’s rumours of a Bitcoin Unlimited president that may be appointed! 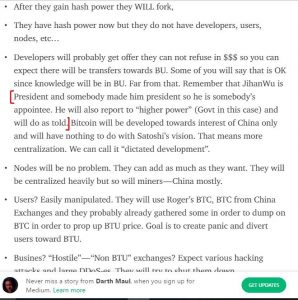 Roger Ver would surely receive more backlash if this happens. As he is the spokesman and well-known icon of Bitcoin Unlimited, he may become infamous for this happening.

No one truly knows how this hard fork debate will end or what is truly going on behind the scenes. Bitcoin is a grand prize for any government to try and seize, destroy, or manipulate, but as Roger Ver has found out, trying to change Bitcoin isn’t an easy task.

It could be a good time to store your Bitcoin in cold/offline storage!