Chinese President Xi Jinping is About to Go ALL-IN on Blockchain! MARKETS EXPLODE!

Five-Month Lows Mean Nothing to Bitcoin!

Cryptocurrencies are as turbulent as ever, and for the recent weeks have been a shorter’s market. The price of Bitcoin dipped to five-month lows below $7,500, with altcoins following the trend. Some even speculated that the announcement of Google’s new quantum computer being able to break modern cryptography (including that of cryptocurrencies) spooked the markets.

As despair gripped investors once more, an unexpected price surge has redeemed most of this week’s losses…

Coins are green across the board! With the big three up as well: Bitcoin (BTC) is up almost 30% Ethereum is up almost 20%, and XRP has had a respectable 9.25% gain. 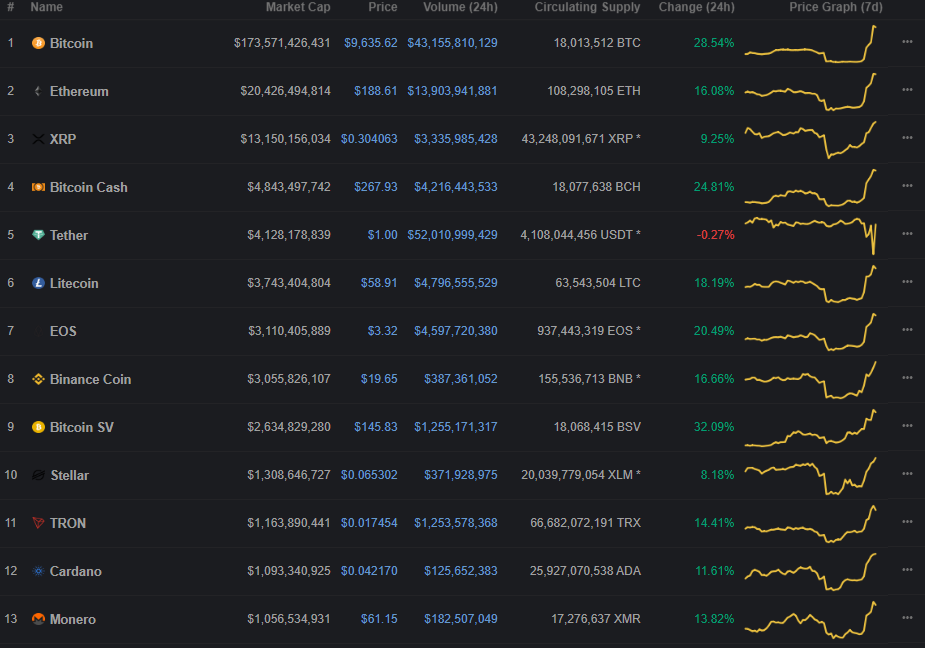 Shorters were likely caught off-guard, which reminds us of the volatility of the cryptocurrency markets, even with monthly lows! Source: https://coinmarketcap.com/

This week’s losses have been recuperated on the huge news of Chinese President Xi Jinping making very positive statements on blockchain technology, the technology that powers cryptocurrencies and can provide a secure mesh network for developing decentralized applications.

The statements made by President Jinping could trigger a more positive sentiment towards Bitcoin and the entire blockchain industry after years of uncertainty surrounding the stance of the Asian superpower over digital assets.

Calls from the Chinese government to ban cryptocurrency exchanges triggered panic in the markets back in 2017, and China is also home to some of the largest cryptocurrency mining farms, which has caused some controversy.

China’s uneasy stance on cryptocurrencies is likely inspired by the desire to control the industry first. With a quiet currency war happening against the U.S. dollar in real-time and the trade war ongoing, China could likely capitalize on beginning a technology race against the U.S.A.

Technology and finance are merging closer year by year. With China and it allies actively de-dollarizing their economies, the implementation of a financial system inspired by blockchain and cryptocurrencies is extremely realistic. It’s already a hot topic that China’s central bank is creating its own cryptocurrency!

At present, major countries in the world are accelerating the development of blockchain technology. China has a good foundation in the field of blockchain.” – President Xi Jinping (translated)

Jinping’s words on the blockchain sector follow a string of statements from some of the highest figures in the U.S. Government, including Trump weighing in on Bitcoin and Treasury Secretary Steven Mnuchin describing cryptocurrencies as a “national security issue.”

While it is worth noting that the Chinese President did not address Bitcoin or any other cryptocurrency directly, it’s likely to be of high priority in blockchain discussions within Chinese authorities as exchanging value is the primary use case for blockchain at the moment.

Either way, things are getting very interesting, and digital assets may have a critical role to play as the geopolitical arena continues to highlight uncertainty.