Cost-Effective 51% Attacks Could Cripple a Variety of Popular Altcoins!

It’s been a hard couple of weeks for popular cryptocurrencies Verge and Bitcoin Gold, as both have been at the receiving end of much-feared 51% attacks. This is when more than half of the processing power of the respective blockchain is used to control and compromise the network.

Statements were made by Verge and Bitcoin Gold representatives regarding the attacks, with Verge claiming it was a mere DDoS attack. 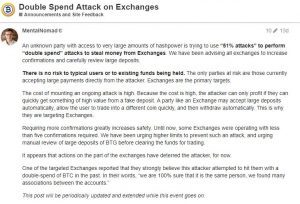 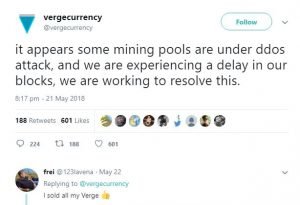 So far, Verge has suffered from up to three attacks, with some Reddit users claiming it was not actually a 51% attack. Regardless, Bitcoin Gold was the other recent victim, causing panic and disruption for anyone using these blockchains. 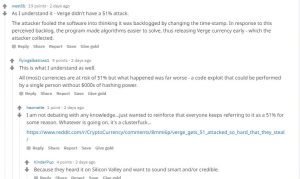 A successful attack can be detrimental to a blockchain. With over 50% of the hashing power under the control of one user, group, or organization, a blockchain’s transactions can be reversed, double-spent, or simply not processed, rendering the network unusable!

Back in 2016, smaller blockchains were faced with attacks and being held ransom. In theory, this could again happen with small cryptocurrencies today. 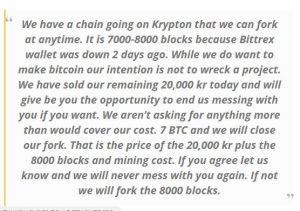 It appears that crippling a blockchain is not that expensive. While blockchains like Bitcoin, Ethereum, and Litecoin are the safer havens, cryptocurrencies like Vertcoin, GameCredits, and Bitcoin Private are easy targets for bad actors.

While it costs over $500,000 PER HOUR to subvert just 2% of Bitcoin’s network power, for other cryptocurrencies, it costs as little as a few hundred dollars to overwhelm the network.

It’s important to fully research any cryptocurrency before purchasing them, as hashing power is an important aspect of PoW blockchains. 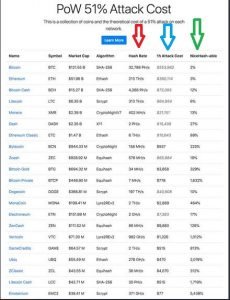 Cryptocurrencies that use the Proof-of-Work algorithm rely on the hashing/processing power of miners to process and confirm transactions and data on their blockchains.

It’s a delicate balance, as the network needs a sufficient amount of miners to prevent a backlog, but the mining power must be evenly distributed to avoid a singular, dominant miner being able to take control.