Crypto Correction – Is the Bear In?

Crypto Correction – Is the Bear In?

It’s a sea of red as the cryptocurrency markets pull back further, with many popular altcoins down 20-30% on average! Many investors who bought at the top are yet again panicking as they see their portfolio down by over a quarter. 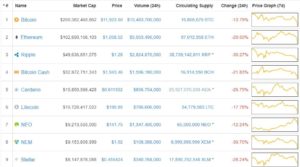 The market cap at the time of writing has plunged back to the $550 billion area, with even powerhouse Bitcoin back in the $11,000 region.

The recent bull run from the majority of altcoins left the markets exhausted and overpriced. Bitcoin has struggled to reattempt its all-time high, and the RSI was extremely high for the market in general. The blunt reality for many digital assets is that their price is not calculated around adoption or use cases, but rather speculation and hype.

Another reason for the market crash is China yet again making tough statements on cryptocurrencies and regulations. This is something the cryptocurrency community should be accustomed to, as numerous (not all) market pullbacks in the last 12 months were in direct response to China’s tough stance against digital currencies.

Other rumors include a domestic block to all cryptocurrency platforms that allow centralized trading and services. Time will tell whether this is true or just more bad news to ignite fear in the markets.

On top of that, last week, South Korean authorities issued reports of banning cryptocurrency exchanges, triggering a price pullback in the markets. South Korea is one of the largest cryptocurrency markets in the world, alongside China and Japan.

Will it Get Worse Before it Gets Better?

The cryptocurrency markets are highly volatile on any given day. While full research and caution is recommended, Bitcoin can go either way at the moment. It can revisit the $8,000-9,000 region or rebound to $25,000.

It’s also likely that more regulatory stances will be made throughout 2018. In 2017, Bitcoin crashed by 30% over five times without breaking its upward trend. Remain logical, and always look at the bigger picture.