Deepest Pits of a Bear Market: Can This Surge Last?

As the markets stand on the edge of deeper lows, crypto investors enjoyed an unexpected end-of-week price rally with gains across the board on the largest cryptocurrencies by market cap.

Following weeks of sharp price drops, a surge of $10 billion flowed back into the crypto sector, boosting cryptocurrencies out of stagnant trends and pushing the total market cap of the sector towards $122 billion.

It’s important to note that this does not symbolize an end to this bitter bear market. 2018 was riddled with similar dead cat bounces, but investors, traders, and users will likely welcome the positive price movements nonetheless.

At the time of writing (February 9th, 2019), Litecoin stands as one of the biggest gainers in the top ten coins, overtaking smart-app platform EOS and digital cash rival Bitcoin Cash, now taking the number-four spot. How long it will maintain this position remains to be seen. 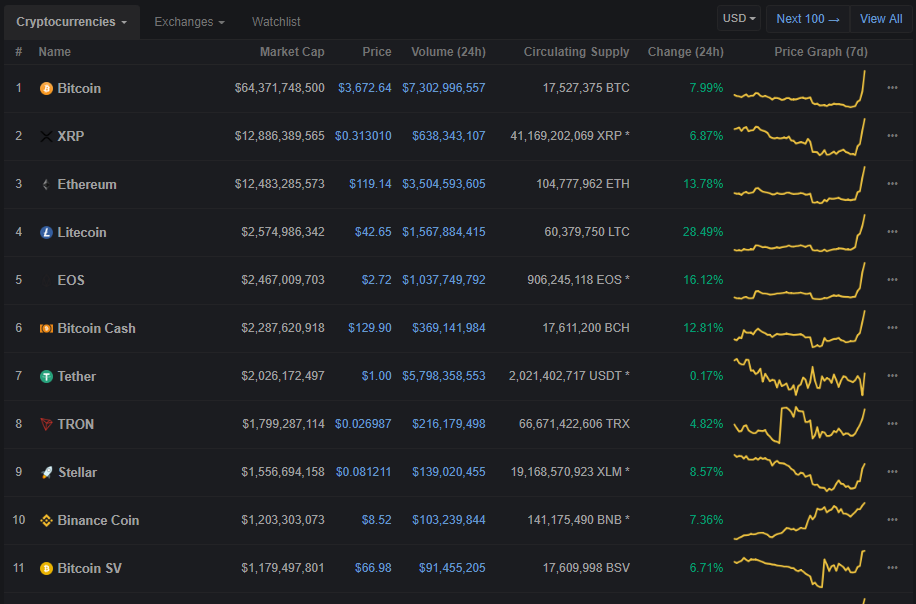 Litecoin Then and Now

We’ve been following Litecoin from the days it traded at a low of $3.00 to the dizzying heights of above $300 and back down to the recent yearly low of $23.00.

Created by Charlie Lee, Litecoin’s purpose was to complement Bitcoin, rather than compete with it. As it has similar fundamentals and software to Bitcoin, Litecoin has often been dubbed “digital silver” to Bitcoin’s “gold.”

It wasn’t until activating Segregated Witness in mid-2017 that the Litecoin ecosystem and community began to reawaken and be taken seriously once more. This is reflected in the price, as it finally began to move upwards from the $3.00 range and eventually peaked at $360 in the final weeks of 2017. 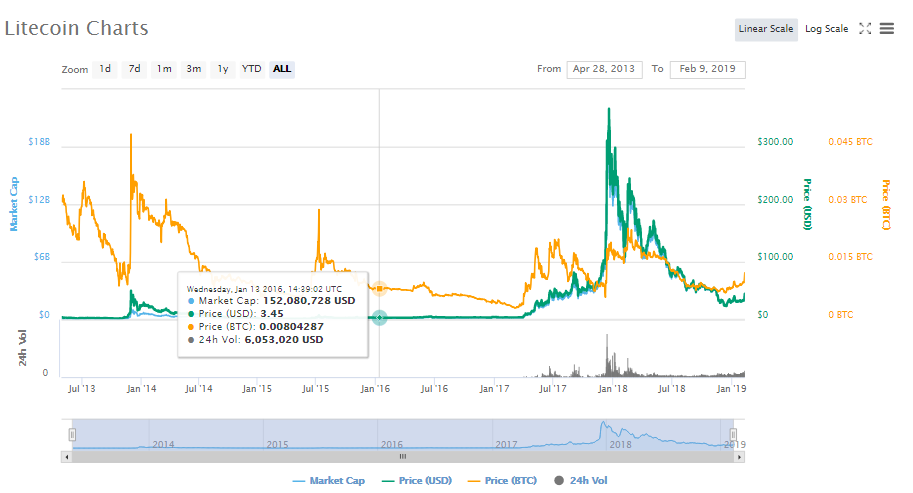 Despite Litecoin’s ability to hang in there, Bitcoin maximalists believe Litecoin will have zero utility in the future as Bitcoin overcomes its scalability problems via the Lightning Network and off-chain applications.

Below, we will take a look at some influential news and events that could make 2019 a strong year for Litecoin…

In regards to Litecoin, the billions of dollars entering the markets could be the first part of a one-two knockout combo!

Litecoin’s knockout blow of 30% gains is likely from the announcement made by software company Beam regarding its cooperation with the Litecoin Foundation to enhance privacy on the Litecoin blockchain.

“The Litecoin Foundation has approached Beam about possible cooperation to implement Mimblewimble via Extension Blocks on Litecoin.

We have started exploration towards adding privacy and fungibility to Litecoin by allowing on-chain conversion of regular LTC into a Mimblewimble variant of LTC and vice versa. Upon such conversion, it will be possible to transact with Mimblewimble LTC in complete confidentiality.”

The Mimblewimble protocol, which aims to bring deeper privacy to cryptocurrencies, is being developed to run on Bitcoin and is used by new cryptocurrency GRIN.

When is Litecoin Halving Again?

The long-anticipated Litecoin mining reward halving is later this year, an event that triggers greater scarcity in the supply of LTC.

On the Litecoin blockchain, the mining reward is reduced after every 840,000 blocks are generated, or approximately every four years.

Litecoin miners currently receive a base reward of 25 LTC after each (legitimate) block is generated on the blockchain; after the halving event, miners will only receive 12.5 LTC.

Bitcoin and other proof-of-work cryptocurrencies also go through a similar event, driving scarcity and changing the coins’ inflation rates.

Litecoin’s increased scarcity, which is estimated to happen in August 2019, could currently be priced in before the event occurs. This may also trigger a bullish sentiment around LTC, despite the overall downward pressure in the cryptocurrency markets.

Bitcoin is set to go through its next halving event in 2020. Many believe Bitcoin’s increasing drop in mining rewards is what influences its long-term upward trend.

Onwards and upwards for digital silver!