Cryptocurrencies in 2018: The Greatest Investment Opportunity of the 21st Century, or is the Party Over (Again)?

Cryptocurrencies in 2018: The Greatest Investment Opportunity of the 21st Century, or is the Party Over (Again)?

Blood was on the streets this week, as a long-awaited price correction hit the cryptocurrency markets, providing investors with an early Christmas bargain! 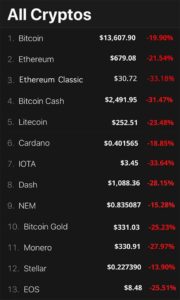 After a parabolic price rally, over $150 billion was wiped out, triggering price corrections on all of the flagship cryptocurrencies, with a brief rebound occurring before another correction hit across the board.

At the height of this impressive rally, Bitcoin scraped just under $20,000. As always, many who bought at the top panicked as the price tumbled, though such swings in price and market cap are not unfamiliar in the cryptocurrency space, and Bitcoin’s rally needed a healthy retraction.

Is the Bitcoin Party Over (Again)?

As panic gripped the markets, many began stating that the bull market was over and that Bitcoin futures were responsible for the price correction.

It’s also worth keeping in mind that we may not see the true effects (if any) of the Bitcoin futures until later in 2018, and there is still a real possibility Bitcoin could correct as low as $8,000 before a recovery and reattempting another all-time high.

This would not mean the bull market is broken, but rather that it’s retracing and building support if Bitcoin holds at $8,000 or goes that low.

Could 2018 Give Us the Greatest Investment Opportunities of the 21st Century?

We have witnessed astronomical gains across the markets, with Bitcoin performing the most modestly.

2018 could be the year regulations hit digital assets around the world, but we may also see the emergence of even larger amounts of institutional and retail capital entering the ecosystem.

This could be a matter of survival for corporations trying to keep pace with the development of technology, as we have blockchain, DAG (Tangle), and now Hashgraph technology all providing new possibilities that could not previously be achieved. 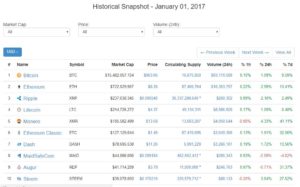 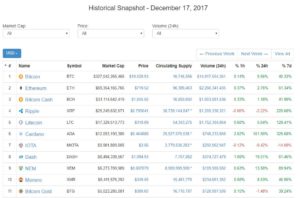 Cryptocurrencies are barely mainstream and are relatively speculative due to their limited exposure. This could change drastically as we see further weakening of fiat currencies, geopolitical tension, and economic uncertainty.

It’s very possible that we will witness the greatest transfer of wealth in history, as the old financial system is no longer trusted and soon to become obsolete.

In less than 12 months, average investors have taken the risk and created fortunes. A new wave of elite wealth will come from those who embrace cryptocurrencies and innovation.