Cryptocurrencies are Now Being Taken Seriously in the Financial World!

Cryptocurrencies are Now Being Taken Seriously in the Financial World!

As we reach the end of 2017, the cryptocurrency space continues to defy the laws of economics. As the combined market cap breaks through $500 billion, we can look back at 2017 as the year cryptocurrencies began to move mainstream and be taken seriously as an investment and alternative to government-backed currencies. 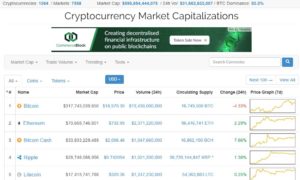 With Bitcoin, Bitcoin Cash, Ripple, Litecoin, and Dash all providing solutions for settling cross-border payments, the current system we use for payments is now under pressure to keep up.

Using cryptocurrencies is easier than ever. Companies like BitPay offer customers a payment card that allows for spending Bitcoin directly anywhere that accepts Visa.

BitPay will not be stopping with Bitcoin. With the implementation of Bitcoin Cash and more altcoins being promised throughout 2018, cryptocurrencies are becoming less speculative and more of a real asset that can be used to purchase goods and hold value.

Coinbase is just one of the many user-friendly exchanges that enable users to purchase Bitcoin and other popular cryptocurrencies directly from their bank accounts.

2018 will be an interesting year for Coinbase. With rumors of new coins being added, the hot favorites include those such as Ripple, Dash, IOTA, and even privacy-focused Monero.

With Bitcoin futures listed on the CBOE and CME, the financial world has to accept that Bitcoin and similar legitimate cryptocurrencies are assets to be taken seriously and are not just for reckless traders, criminals, and technology enthusiasts.

As we begin to see the potential that blockchain tech brings, this is no longer a space JUST for small-time developers. Corporations are now beginning to watch the progress of digital assets and blockchain tech closely, and Ethereum, NEM, IOTA, and Ripple are clear examples of this.

Blockchain technology is here to stay!