Over the last twenty years, the gaming industry has experienced huge growth in popularity and in capital. The recent Pokémon Go epidemic taking the world by storm clearly demonstrates this.

With the Internet of Things influencing every aspect of our lives, the gaming industry has leapt from console platforms to our very smartphones and devices, enabling gamers to play their favourite games anywhere at any time.

Blockchain technology and its potential to automate the Internet of Things has created excitement amoungst start-ups, investors, and users alike. We are already witnessing blockchain technology revolutionize the way we send and store money with Bitcoin, Litecoin, Dash, and many others, and the huge gaming industry could be next! 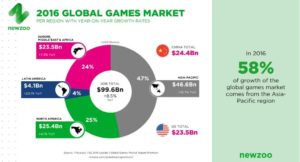 At the end of 2016, the gaming industry was worth around $99 billion, with the blockchain industry catching up at the $90 billion area and Asia leading the trend in growth.

Blockchain Innovating More Than Just How We Transact Value!

With gaming moving online more each day, blockchain technology has the potential to create a huge impact on the industry, whether using digital coins or tokens as a way to purchase in-game features and upgrades or using blockchain-based applications to create gaming stores or even play games directly upon.

The potential is limitless. As technology continues to advance and become a mainstream aspect in the lives of billions, two game-focused cryptocurrencies have made headlines recently regarding gaming and digital currencies: GameCredits and DigiByte.

In the past year, these two popular cryptocurrencies have welcomed huge growth in capital and price. Both coins can be traded on popular exchanges such as Poloniex and Bittrex and are currently creating influential inroads into the gaming community, bridging the gap between blockchain tech and gaming quite effectively.

With a 4,000% price growth in the last month, a huge pump has happened as fear of missing out and rumours have gripped the crypto community once again!

Other key factors in the recent price movement could be from the excitement of DigiByte being in the top twenty finalists in the Tech for Integrity Challenge, run by Citibank. It is also rumoured to be working with Minecraft, however, this may be an over-exaggerated statement, which triggered the huge bullish price movement in the first place. 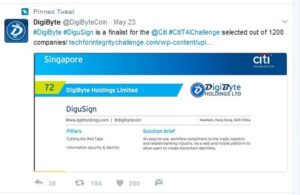 DigiByte has a coin supply cap of 21 billion, as opposed to Bitcoin’s 21 million supply, and it can also boast having SegWit activated on the network. There will be numerous announcements over the summer, and time will tell whether the recent news spreading throughout the markets is hype or genuine progress for the DigiByte community.

GameCredits and the MobileGO ICO

Another popular coin with its own gaming store and rise of over 300% in price, GameCredits, has also experienced huge growth over the recent months. Its gaming store seeks to be a rival to Google Play in terms of gaming purchases and downloads.

Another interesting element to the GameCredits ecosystem is their recently finished ICO MobileGo, which has been the largest ICO in history, raising over $53 million last month! 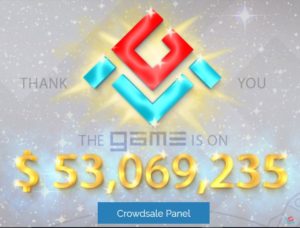 The MobileGo app is a dual blockchain application running on both Ethereum and Waves through Smart Contracts. The overwhelming success highlights the popularity of gaming and blockchain technology and is a strong sign of how much industry can grow in the long-term.

Gaming On a Blockchain Using Digital Currencies is a Reality!

Blockchain technology continues to innovate and automate more than just how we transact money. With millions of gamers spending real funds on game upgrades and new releases, the ability to use a digital currency to buy something would be an added joy to enthusiasts. This futuristic scenario is now a reality.

As time goes by, more start-ups will launch ICOs to kick start their innovative projects, and gaming will be a popular industry to target. With Ethereum’s ability to build applications, we may see more than the financial and gaming industry being innovated by blockchain-based technology!