While I am long-term bullish on blockchain technology and cryptocurrencies, there are obvious things to point out when looking at the current state of the markets that many simply choose to ignore.

Cryptocurrencies have slightly recovered from February and March’s lows, and Bitcoin’s long-term trendline has proven to be solid (so far), with each price correction rebounding off or around where the trendline resides.

However, despite the small bullish opportunities within this larger downtrend, the cryptocurrency space is still down over 50% from its $800 billion market cap high in December, leaving many of those newcomers at a loss with the cold reminder that what goes up must always come down. 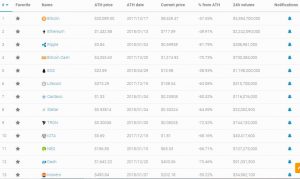 According to Athcoinindex.com, some of the cryptocurrencies that have held their value best are Bitcoin, Litecoin, EOS, Ethereum, and Decred, bottoming out with losses of up to 60-70%.

Many smaller-cap altcoins (and even some big players) proved they were not ideal stores of value. Bitcoin Gold, Bitcoin Diamond, Ripple, NEM, and Verge are all still currently more than 80% down from the December highs we witnessed.

Speculation Vs. Utility – Adoption is Coming!

Cryptocurrencies like Ripple experienced huge price increases based on rumors. Due to a fear of missing the next big cryptocurrency, Ripple benefited, but it also suffered from the rumors of being listed on Coinbase, and NEM rallied on the news of being used on WeChat.

Unfortunately, this was not enough to keep each of these coins from decreasing in value by over 80%!

As adoption increases, the speculation can be replaced by a price based on data driven by adoption. Some people use Moore’s law, Metcalfe’s law, and other methods to determine the value of a specific technology.

There is positivity, though. We are already seeing blockchain technology become widely accepted. Ripple recently launched xRapid, which is now ready for financial institutions to adopt. Bitcoin and other cryptocurrencies are implementing the Lightning Network, allowing scalable micro-transactions. Goldman Sachs is working on a cryptocurrency trading desk!

The blunt reality is that until scalable use cases are fully embraced, the cryptocurrency markets will remain a speculative and volatile environment. The markets went through an explosive bull run throughout 2016/2017, and the downtrend we now witness will prove to be healthy in the years to follow.

It might be worth researching the cryptocurrencies that performed best in the brutal January 2018 crash, as there will likely be sharper sell-offs in the future while the blockchain and cryptocurrency spaces continue to evolve, grow, and harbor larger amounts of capital.