Dash: When Will the Bubble Pop? Is it Bitcoin’s Top Competitor?

Dash: When Will the Bubble Pop? Is it Bitcoin’s Top Competitor?

Dash has reached another all-time high of $58! At the time of publishing, Dash is trading for around $43.

It’s been a strong year for Dash already, as it entered the New Year at the $11 region, with a present market capital of $311,172,722. Overtaking Ripple for the number 3 spot was no challenge for the Dash community.

This now leaves only two other cryptocurrencies ahead of Dash: innovative Ethereum and the dominant king, Bitcoin!

With a continuous presence in the top ten cryptocurrencies for market cap, Dash has demonstrated consistent high volume, which means people are using it and there is a demand factor.

The community members are extremely united and loyal to Dash, which is evident. Software updates like the recent 12.1 upgrade (or “spork”) were met with over 90% acceptance, making the process quick and painless.

This is something Dash takes pride in, and it uses this strength against Bitcoin, which is currently struggling to find a solution for scaling. This is another key reason why people are trading and investing in Dash. Sending transactions using InstandSend sends funds almost instantly, which, at the moment, confirms faster than Bitcoin.

One of the other popular features used by Dash is PrivateSend, which adds an anonymous layer to Dash by mixing transactions with other users on the network. The level of privacy can be changed by how many mixing round the transaction has.

What Dash does best is marketing. It aims to be seen as user-friendly, and not just adopted by tech enthusiasts or “nerds.” With most other cryptocurrencies, this is a common flaw its competitors have always struggled with. Dash means Digital Cash, so it’s simple to grasp what its primary function is for newcomers.

As time has gone by, Dash has tried to shrug off the shady image that its predecessors Darkcoin and XCoin had.

Dash Seeks to be so Easy to Use That Your Grandma Could Use it!

The flagship feature Dash is working on is Evolution, which will enable your grandma to use it.

The estimated time for this to happen is towards the end of the year. The updates Dash is going through now are for the Evolution feature, which could also have an effect on the price as the markets eagerly anticipate Dash’s upgrade and steps taken towards it.

Developments With Other Businesses

In the last few months, Dash has formed partnerships with numerous companies, one of which is BlockPay. This means that Dash can be used in select retailers across Europe and South America, truly making it Digital Cash. 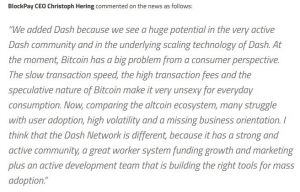 This could be fake news, but rumours floating around the forums are that Coinbase is considering adding Dash to their list of currencies.

At the moment, it’s just Bitcoin and Ethereum on the consumer site, while GDAX, which is Coinbase’s trading platform, has Bitcoin, Ethereum, and Litecoin.

With rumours like this, the price of Dash could be heavily manipulated due to false hype. It hasn’t been the first time rumours like this have happened, as there were also rumours of Monero being listed on Coinbase… This evidently never happened.

It’s no secret in cryptocurrency markets that there is huge market manipulation on the exchanges. Traders who hold thousands of dollars’ worth of the respective coin (often referred to as “whales”) will buy the chosen currency in the hopes of creating a “pump.” If executed correctly, it creates a ripple effect as traders try to ride the surge to its peak.

What follows after is a hard, sharp “dump.” This is usually when the profits are taken and the late investors are stuck and at a loss.

Could this be partially what’s happening with Dash… or could it be a mixture of everything mentioned? Dash is extremely popular, and it is gaining awareness due to its excellent marketing!

As Dash aims to be Digital Cash, fast and used globally, investors are pouring in as an alternative to Bitcoin. With potential investors buying up the available Dash and holding it, this creates less supply, which ultimately drives the price higher.

Dash also has the innovative masternodes. To own your very own masternode, users are required to own 1,000 Dash. This can also affect the price of Dash, with the supply again becoming more limited as so much Dash is in long-term storage. Owners of masternodes receive payments of Dash for holding these nodes.

Dash is Here to Stay

In conclusion, Dash has done incredibly well in the last year, and it has become one of the best-performing currencies of the year so far.

Although this surge will correct eventually, Dash’s fast paced community will continue to grow, becoming the number three currency is no small feat, and with so much innovation coming from the Dash team, it’s safe to say Dash, the Digital Cash, is here to stay for the long-term.

Check out some previous articles regarding Dash!

The Battle of the Anonymous Cryptocurrencies

Dash or Litecoin – Which is Better?