What goes up always comes down, and cryptocurrencies are no different. In what seemed like an unstoppable rally, Bitcoin reached $2,800, leading to a mass selloff that wiped hundreds of its trading price. Bitcoin now trades around the $2,150 region at the time of writing.

It was only months ago that Bitcoin correcting towards the $2,000 region would have been an investor’s dream, with many speculators putting this pullback down as profit taking into fiat as the overall market capital of the entire cryptocurrency ecosystem went from $90 billion to $60 billion, setting the markets back a few weeks, at most!

As always, Bitcoin has a large influence on the digital currencies, with many using Bitcoin as the gateway to buy and sell altcoins.

Almost every cryptocurrency was down considerably after experiencing huge price surges and increased market capitals during the last few weeks, with Ethereum, Ripple, and other flagship coins taking heavy losses. With many buying in at such high prices and greed preventing users from taking profit early on, we could be currently seeing a large majority stuck in bull traps, which could encourage more panic selling in the coming days or weeks.

This could very likely put Bitcoin and altcoins into a temporary bearish market as capital floods back into fiat and enthusiasts try to salvage what’s left of their investment!

The saying of “buy low, sell high” seems to be a bitter reminder of how much relevance those words of wisdom possess, despite the logical methods of investing being disregarded over the past weeks! 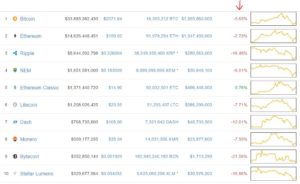 Blood on the streets: the top ten cryptocurrencies on CoinMarketCap.com are all down after the mass exodus back into Bitcoin and fiat!

The Pullback Isn’t Driven by Bad News and is a Good Thing Long-Term!

With no bad news or any drama influencing this correction, it highlights that it could just be a healthy correction, profit taking, and an opportunity for new investors that missed the train before to be in the next potential rally. It also diminishes the worries of a Dotcom-style bubble.

We could see more price corrections over the next several weeks, encouraging many to use this as a “bargain” opportunity on digital coins and then sell off after making fast profit. Investors may also be more cautious and be quicker to sell back into fiat after witnessing this sudden market correction.

With popular exchanges like Coinbase buckling under the overwhelming volume of buyers and sellers, it appears the correction has given savvy new investors their long-awaited opportunity to become owners of cryptocurrency.

The Blockchain Bull Run May Still Be On!