Over the past week, the entire crypto community has been left speechless as Litecoin (dubbed “Bitcoin’s silver”) surged from a stable $4 range to the $7 region!

The unexpected rally from Litecoin is the latest of altcoin surges from Dash, Ethereum, Ripple, and Monero following fears of Bitcoin hard forking. Litecoin has dropped a bomb in the final hour. 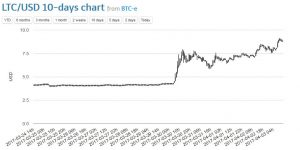 Just a Pump and Dump, or Something More?

While many say it’s just a pump and won’t last, there have been several constructive reasons as to why Litecoin has jumped in value and volume.

Like its big brother Bitcoin, Litecoin is also going through a soft fork for SegWit. Before last week, Litecoin stalled at 23% approval, but since this surge, Litecoin now stands at 58% of the needed 75% for activation of SegWit.

Mining pool F2Pool was one of the larger pools to signal for Litecoin to implement SegWit. This could have been the reason for the recent price surge, as insiders likely knew these events would happen before it became official.

If SegWit becomes activated, Litecoin will be ready to activate its side chain feature, the Lightning Network, and it will be fully scaled for worldwide usage. This could be why more capital has poured into Litecoin.

Litecoin Creator Charlie Lee is Pro-SegWit for Litecoin and Bitcoin!

Lee envisions Litecoin leading the way to help solve Bitcoin’s deadlock regarding scaling and transaction congestion. He has also mentioned it would be safer to test SegWit on Litecoin first, rather than on Bitcoin.

What does the future have in store for Litecoin and SegWit? As the 75% threshold for activation becomes ever closer, Litecoin will likely rally more as a fear of missing out grips the markets. At the time of writing, Litecoin is trading for around $9 on most exchanges.

Litecoin adopting SegWit before Bitcoin would, in theory, make it the better coin. However, the consumer price of Bitcoin and Litecoin usually trend in similar patterns. Even so, becoming the winner of the SegWit race would put the silver counterpart to Bitcoin in a unique situation… would it be used in more mainstream platforms than Bitcoin?

Litecoin May Save Bitcoin From Hard Forking?

By encouraging the intertwined communities to support SegWit, Bitcoin will finally be able to shrug off the dark cloud of a hard fork. People will no longer see a need to argue over the future trajectory of becoming mainstream, which could ultimately save Bitcoin’s reputation and future prospects.

With Bitcoin’s network congested and each block being near full to its capacity, Litecoin’s network is an ideal, stable, and technologically similar alternative for users to transfer funds on, further helping the problems being faced in the crypto space.

Litecoin may be called boring, but it could be essential for blockchain-based currencies trying to go mainstream as an example for others to learn from!