Early Monday morning, many who had supposedly signed up for a pre-sale of Enigma tokens received a suspicious email claiming to be from the Enigma Team stating the pre-ICO had begun. This was not the case, and it has turned into a Monday morning nightmare for some. 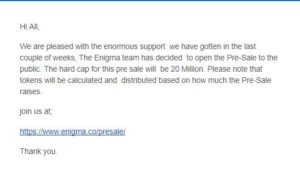 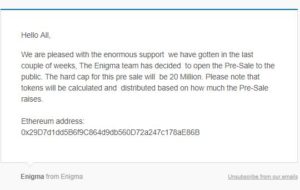 By sending these emails in the images above to potential Enigma investors, a scammer has managed to steal $400,000 of Ethereum!

Enigma is hot news in the crypto space, and many wanted to get in early on this innovative new start-up. With the main ICO crowdfund not starting until September 11th, 2017, Enigma seeks to tap in to the market of hedge funds and cryptocurrencies, effectively bridging the innovation gap between the two.

This has been received warmly, as many now look at Bitcoin and cryptocurrencies as a hedge against a weakening fiat-based system, and there is growing demand for the inclusion of crypto into one’s portfolio. 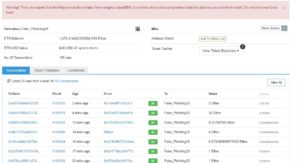 How Did the Scammer/Hacker Obtain Users’ Emails?

While it’s still mostly unknown, many are suspecting the channels on Slack, Telegram, and potentially the email list had been compromised. Interestingly, there was an article detailing how to join the Enigma ICO “whitelist” going around on Steemit, however, it is still unclear as to how people’s emails were obtained.

Many didn’t get the dire warning in time and assumed the scammer’s email was real. As a result, they ultimately sent their Ethereum unwittingly to the hacker’s Ethereum address! As the hours passed by, the Enigma team sent out warnings to investors through the different social media platforms stating that it was indeed an illegitimate address and not associated with Enigma. 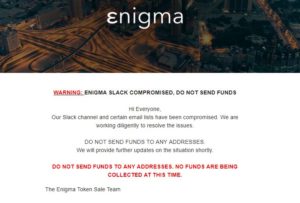 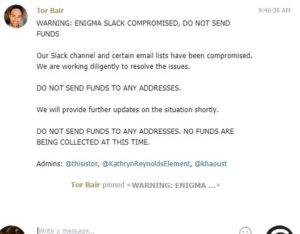 Let the Enigma Team Resolve This, and Let’s Learn From It!

The best course of action in the meantime is to not send any funds to any addresses and give the Enigma team time to manage the situation as best they can.

In reality, it is unlikely that people will get their Ethereum back. It’s a painful realization, especially when we can see the balance of the hacker’s address continue to grow. This is the harsh reality of cryptocurrencies and ICO investing – there is huge risk!

Enigma still looks like a great project that will most likely do extremely well in the long-term, but we must be aware of phishing sites and fake emails. Someone has just made $400,000 in a matter of hours due to people’s lack of due diligence and what is ultimately greed…