After a year of anticipation, the EOS blockchain is finally set to launch, as block producers (node operators) from around the world decided to vote “go” on launching the main net on June 9th, 2018 after a series of vulnerabilities were discovered.

The process of launching began after Block.one released version 1.0 of the EOSIO software to the public after multiple test versions were released in the recent months prior.

Prior to the launch, a daily meetup would be conducted online between block producers on whether or not the EOS protocol was ready for launching. A behind the scenes livestream of the process was shown on the popular Good Morning Crypto show.

EOS has been dubbed the Ethereum killer, as its ability to scale (if all goes well) will be superior to Bitcoin, Ethereum, and most other blockchain platforms, with a capacity to process up to a million transactions per second.

We have discussed the direct rivalry between EOS and Ethereum in the past, although other smart contracts or smart assets (such as NEM, Cardano, and NEO) will be competing for Ethereum’s innovative dominance share.

The EOS blockchain is aiming to be an operating system-like architecture for decentralized applications, with zero fees and easier to develop applications on than Ethereum.

“The resulting technology is a blockchain architecture that may ultimately scale to millions of transactions per second, eliminates user fees, and allows for quick and easy deployment and maintenance of decentralized applications, in the context of a governed blockchain” – EOS Technical Whitepaper V2

Airdrops and the Future

Another bullish influencer on the EOS price is the amount of airdropped tokens to be distributed to holders. The eosDAC is an application launching on the EOS blockchain, and the airdrop meant EOS holders gained the new token at a ratio of 1:1. 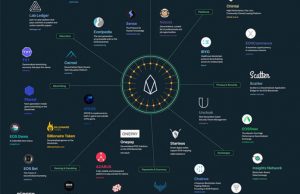 Ethereum applications are also compatible with the EOSIO protocol, and there are dozens of projects launching via the protocol, with many airdropping tokens to holders over the coming months.

EOS is currently the fifth-largest cryptocurrency at half the market cap of Ripple, and it trades at $13.00. If this new competitor is as successful as many hope it can be, it is possible for a Flippening between Bitcoin Cash and Ripple!

Will it be adopted and looked at as the ideal platform to build blockchain applications? The future will be the judge!

Disclaimer: Only invest what you are willing to lose. Always do your own research and read the whitepaper of the cryptocurrency before purchasing.