Ethereum Has Had a Bumpy Week, But is This a Good Buying Opportunity?

Ethereum Has Had a Bumpy Week, But is This a Good Buying Opportunity?

2017 has been a great year for the Ethereum community, but this last week has been a turbulent one. Ethereum has experienced congestion problems due to the amount of ICO start-ups using its Smart Contract features, as well as a flash crash where its trade price went from the $300 region to below $13.00, with an almost instant recovery.

The flash crash happened on GDAX, a popular exchange for traders. A multimillion-dollar sell order was set to low prices, causing the number two cryptocurrency to crash. The knock-on effect began with panic selling and not enough buy orders to hold the price, bruising confidence in the coin and giving investors a sharp wake-up call to the dangers posed in the digital economy.

The ICOs have generated millions of dollars of capital in the recent months, and many of them are using Ethereum’s Smart Contract technology to create tokens. They have helped increase Ethereum’s trade price and overall market cap.

However, this huge boost in capital has come at a price. Like Bitcoin, Ethereum is now suffering congestion problems, a victim of its own success and a sign of maturity!

One of Ethereum’s key strong points is the ability to improvise and adapt to situations. Just like with the issues the network experienced in the latter half of 2016, Ethereum will overcome the issues it has today. 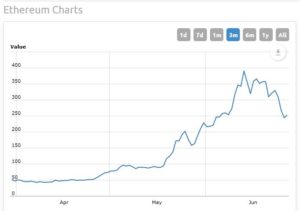 Many are now wondering how low Ethereum can go. While many panic sell, others are quietly waiting and watching for a new opportunity to get into Ethereum at a bargain price.

The saying is “buy low, sell high” and this philosophy may prove to be the best course of action for investors seeking to get into Ethereum for the long-term at a safer price.

Rather than focusing on the last seven days, we should take a zoomed-out perspective on the chart. Ethereum has still performed incredibly for investors. Its violent growth needed a correction period, and if support can be found around the $200 region, Ethereum could have a strong launch pad to attempt at regaining its momentum, breaking the $400 barrier and maybe even trying for the number one spot again – an event many have dubbed “the flippening.’

Ethereum has huge potential to bring, and in the long-term, this is simply another blip on its long and prosperous journey!