Ethereum faced difficulties during the latter half of 2016, following the DAO hack and several DDoS attacks on its network, which resulted in Ethereum hard forking more than once. However, this seems to only strengthen Ethereum in the long run, while providing investors with excellent buying opportunities.

Why is Ethereum Surging?

Ethereum is a hub of innovation. Although similar to Bitcoin, Ethereum can do more than be a currency. By using “smart applications,” users can build upon Ethereum’s blockchain, essentially creating applications within applications.

This gives Ethereum the potential to be used not just in monetary terms, but in other industries that need innovation and automation to be able to move forward. It is well known that Microsoft shows interest in Ethereum, as well as many other large tech and financial companies.

Many long-term investors and tech enthusiasts believe Ethereum will be the platform in which the Internet of Things will eventually move to, dubbing Ethereum as Internet 2.0, a realistic possibility now that Ethereum has formed an “alliance” around itself with some of the most influential companies in the world.

The Enterprise Ethereum Alliance Could Be Why There’s a Price Rally!

Enter the Enterprise Ethereum Alliance (EEA). This is quite possibly one of the biggest developments for blockchain development, with companies such as Microsoft, JP Morgan, UPS, and many other movers and shakers.

The only cryptocurrency working with more banks than Ethereum is Ripple (XRP). With an almost infinite amount of resources and investment capital behind it, Ethereum’s bullish run can be a direct reaction of this alliance, as it is more likely than ever that Ethereum is here to stay for the long-term and will likely have an important role in the development of blockchain technology and the Internet of Things in the foreseeable future.

It is also likely that news of this has attracted outside capital from investors that otherwise wouldn’t have invested in Ethereum. Outside investment is an extremely likely factor as to why Ethereum’s price and market cap have grown so fast.

Other members of the Alliance launch include: 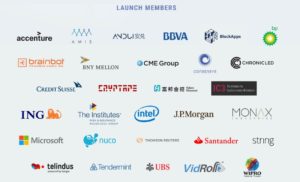 Could There Be a Market Pump and Manipulation?

As many have made fortunes trading and investing in Ethereum during this rally, the possibility of traders pumping the price of Ethereum is another likely indicator of Ethereum’s price increase.

Ethereum’s volume has increased rapidly and always been the highest after Bitcoin’s. Even in relatively calm periods for cryptocurrency, traders are likely using long margin positions to gain substantial profits, pushing the price of Ethereum up higher and preventing it from having a healthy correction.

Eventually, what goes up must come down. Ethereum is no exception, despite the positive progress that has been made since the start of 2017. With a much-needed correction, new investors would have a chance to buy low and not be stuck in a bull trap, however, some are saying Ethereum could reach the $100 area, which is something that remains to be seen.

In conclusion, until Ethereum corrects (at least slightly) and flushes out pump and dump traders and weak hands, we cannot know accurately what its market cap should be. Another key point is that Ethereum isn’t being used in any mainstream applications, which is perhaps an unfair statement giving that it is still extremely young and in the development stage, but it is important to note this.

Ethereum will likely become Proof of Stake, rather than Proof of Work, and as the EEA grows and gains momentum, we will see Ethereum hard fork again. In the near future, Ethereum will likely develop an application that is used globally, but until then, patience is needed. Large investments and resources are being poured into the Ethereum ecosystem, which make for exciting developments ahead.

Ethereum is one to watch both short-term and long-term!